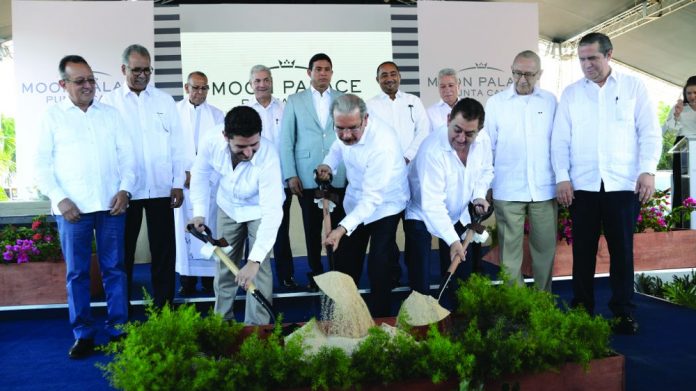 In a further indication of the Dominican Republic’s ongoing gaming and hospitality investment boom, Palace Resorts has decided to add an additional 1,200 rooms to its Moon Palace Punta Cana resort development.

Mexico-based Palace Resorts is set to increase its investment in the Dominican Republic, with the company unveiling new plans to further expand its currently under construction resort project in Punta Cana.

The firm will add an additional 1,200 rooms to Moon Palace Punta Cana, scheduled to open in 2021. This latest investment will bring the property’s total room count to 3,350.

Previously budgeted at around $600m, the all-inclusive complex will include a casino, 20 restaurants, nine bars, seven swimming pools, a waterpark, a spa, and an 11,000sqm convention centre, along with a Greg Norman Eco Signature Design Golf Course.

Palace Resorts estimates that Moon Palace Punta Cana will draw an additional 250,000 new tourists per year to the country.

“The development in the Dominican Republic was a natural fit for the expansion of the brand, given its popularity in the Caribbean. …We’re here to add to and contribute to this country’s goal of continually increasing the number of visitors that can generate a better income for its inhabitants.”

During a recent luncheon with tourism minister Francisco Javier García, Chapur affirmed that despite negative media reports this year, the Dominican Republic remains a safe tourist destination that will continue to grow and develop.

In line with this, he characterised recent safety issues as a “circumstantial situation resulting from the high-volume tourist influx that the country has welcomed in recent years”.

In July, it was reported that the Ministry of Tourism would be rolling out a range of new measures in an effort to address safety concerns.

The steps include inspecting hotels quarterly, instead of twice a year; requiring resorts to post emergency contact information in every guest room; introducing additional monitoring measures for medical facilities located inside hotels; and opening an emergency tourist centre.

“We can feel confident, that as a country, we have undertaken the necessary actions to counteract the recent events, and will always work towards continuing to improve, and especially prevent these situations from ever taking place again,” García stated.

Regardless of the unfavourable media coverage, the Dominican Republic is currently reaping the benefits of a gaming and hospitality investment boom, with a number of hotel and resort projects in various states of development throughout the country.

The first phase of Hotel Lopesan Costa Bávaro Resort, Spa and Casino opened its doors in Punta Cana back in July.

Developed by Canarian firm Lopesan Hotel Group, the $257m five-star property includes 1,042 hotel rooms, an 11,000 sq ft casino, a shopping precinct, and an events space capable of hosting up to 900 people, along with a nightclub, a sports bar, eight restaurants, a spa, and two beach clubs.

The company’s CEO, Francisco López, affirmed that the resort represents “the placement of the first piece in Lopesan Hotel Group’s expansion plans in the Caribbean”. He added that Hotel Lopesan Costa Bávaro Resort would provide jobs for “around 1,200 new employees drawn from almost all provinces in the country”, in addition to supporting local businesses.

Praising the “legal certainty” the Dominican Republic offers for investors, Lopez explained that after “bureaucratic obstacles and administrative pitfalls” led the company to abandon its plans to expand its resort in Meloneras, Gran Canaria, Lopesan instead decided to look further afield to Punta Cana.

Costing $224m, the second stage of the development is due to be completed in 2021 and will see the addition of a further 1,500 rooms.

Speaking at the resort’s grand opening on 11 July, García proclaimed the new property “a reference point for the global hotel industry”, adding that the Dominican Republic continues to enjoy “a great reputation as a tourist destination”.

The deal calls for a total of eight new-build La Quinta by Wyndham hotels in the Dominican Republic over the next five years – to be located in Punta Cana, La Romana, Boca Chica and greater Santo Domingo – with four properties slated to open in 2021.

Tom Barber, chief global development officer at Wyndham, said the expansion was due to increased demand for upper-midscale lodging in the Dominican Republic, and explained that the hotels would be situated in both in up-and-coming destinations, and those areas with a need for select-service hotels “as alternatives to the island’s upscale all-inclusive resorts”.