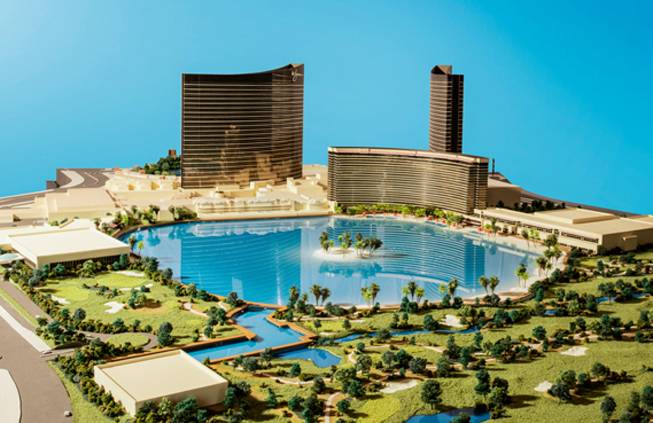 Blueprints for Paradise Park – a brand new $1.6bn lake resort off the Las Vegas Strip – have been revealed by Wynn Resorts, with analysts predicting that the development could bring in over $400m in additional annual revenue for the company.

The founder and CEO of Wynn Resorts broke the news at the company’s first-ever investor day on April 6, which coincided with the opening of the Strip’s new T-Mobile Arena – an MGM Resorts joint venture. Wynn claimed that his company’s new development – which he tentatively dubbed the Paradise Park – would be “the most fun project in my 45 years”.

Plans for the lake resort are still in their apparent infancy, with Wynn forecasting final approval from the Wynn Resorts board of directors this coming September. But that didn’t stop the entrepreneur comparing the proposed park to a Disney resort, saying that it would cost somewhere in the region of $1.6bn (E1.42bn) and include a mile-long boardwalk, firework shows and facilities for both paddle-boarding and water skiing. He also claimed that the development would also see the construction of an additional hotel tower, which would add 1,000 hotel rooms to the current Wynn/Encore capacity, as well as 250,000sq.ft of additional meeting space.

“Somebody take the other side, tell me what’s wrong with this idea?” Wynn joked with assembled investors. “We’ve all drunk the Kool-Aid.”

The prospective plans certainly seemed to strike a chord on the markets: with Wynn shares climbing 10 per cent to their highest level since last August. Meanwhile, a note posted by New York-based analyst David Katz of the Telsey Advisory Group forecast that the lake resort could see annual revenues in excess of $400m (E355.3m). Katz labeled the redevelopment as “a shrewd move on the part of Wynn to unlock further value from the land.”

Earnings on the Wynn Gold Club – which is situated behind the company’s two Las Vegas Strip resorts – have been relatively modest, averaging approximately $5m (E4.4m) per year.

Florida-based lagoon landscaping company Crystal Lagoons will oversee the construction effort on the new park – which Wynn has outlined to open at some point in 2020, providing work gets underway as scheduled later this year.

In an interview with the Las Vegas Review Journal, Crystal Lagoons CEO Uri Man said that the water-based attraction would in fact use 30 times less water than the existing golf-course.

“Our technology is an entire process and the final result makes it possible to have a massive crystal-clear lagoon at very low costs of construction and maintenance,” he said.

“Mr Wynn has a vision to reinvent Las Vegas by bringing water to visitors. Instead of people traveling to the Caribbean for clear blue water on sandy beaches, he is bringing the Caribbean to them.”