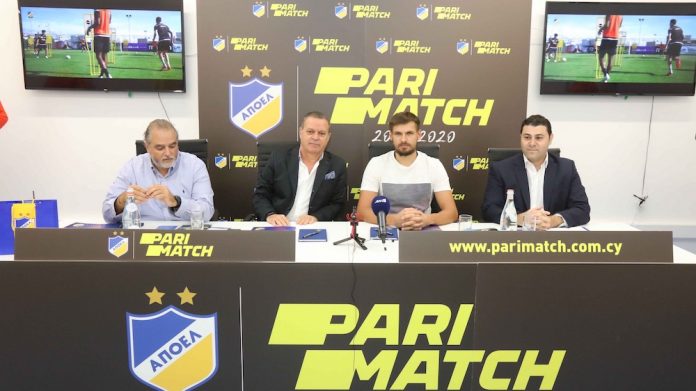 Parimatch, the international betting holding, today announces the renewal of its sponsorship agreement for the fourth consecutive season with APOEL FC – Cyprus’ most successful football team.

As part of the renewed sponsorship deal, the Parimatch logo will be displayed on APOEL FC’s players’ sports kit for another year, and the partners will continue to work together on charitable and community-led initiatives.

[Insert name and position] APOEL said: “We are very excited to embark on yet another successful year of what we hope is a long and fruitful partnership with Parimatch. Each year we embark on even more ambitious projects together. The new powerful Parimatch logo, with its electric yellow colour, is proudly displayed on the APOEL jersey as well as on the modern training center, which was named ‘Parimatch-Archangelos’ last year.”

The successful partnership between Parimatch and APOEL is not just limited to sports, but is underpinned by a commitment to charitable initiatives which benefit the local Cyprus community. Last year Parimatch and APOEL co-operated on support for several charities, with various activities which positively contributed to Cypriot society. Parimatch and APOEL will continue to support the local community and are committed to social responsibility as a key part of their collaboration.

Sergey Portnov, CEO of Parimatch Holding said: “For yet another year Parimatch is happy to join forces with the winning team APOEL. For the 7th consecutive season APOEL was crowned champion of the Cypriot First Division. We are very proud that Parimatch is part of this legendary team’s success and we want our partnership to push beyond our usual sponsorship plans, as strive for victory at every level.

“In addition to our successful cooperation with APOEL, I would like to reiterate Parimatch’s commitment to the Cypriot market. Although the market is small in size, we believe it is very promising, so we will take all the necessary steps to make Parimatch the leading betting company in Cyprus. My presence here today, as well as the establishment of Parimatch’s headquarters in Limassol, demonstrate the importance of Cyprus for Parimatch.

“We are equally committed to supporting Responsible Gaming Week, organized by our regulator, the National Betting Authority. We encourage gamers to play responsibly and focus on the entertainment factor, rather than the easy money.”

It has been landmark year for Parimatch, which announced its partnership with mixed martial arts athlete Conor McGregor and boxing king Mike Tyson. The two Martial Arts Legends and the APOEL blue Legend represent the Parimatch fighting spirit and form the perfect team of winners.

There are no obstacles for Conor McGregor and Iron Mike Tyson. They relish challenges and share the same passion for victory as Parimatch. The partners that Parimatch choose have one crucial thing in common – they always follow the path to victory without any compromise. They are obsessed with being the best – and proving that nothing is impossible.

Stelios Eleftheriou, CEO of Parimatch Cyprus said: “I am very happy that we are extending the agreement with our strategic partner APOEL for the fourth consecutive year. Parimatch and APOEL have common goals and together, we always fight for victory.

“Together with APOEL we are a team not only fit for the football pitch, but for tackling social issues. In addition to our joint corporate responsibility actions with APOEL, we also support the National Betting Authority’s Responsible Gaming Week. Betting should be fun, and the emphasis should be on entertainment, so that it can remain purely a game!

“I would like to thank APOEL for our excellent cooperation. I hope that it will be even more successful this year, to help us achieve our ambitious goals.”