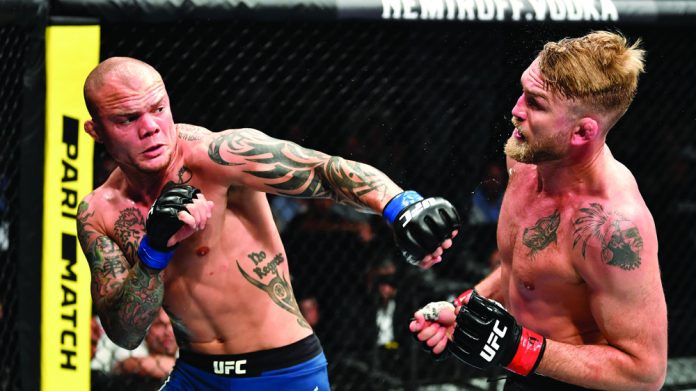 Parimatch reflect on a year of significant achievement in the marketplace and fighting the good fight with UFC.

It has been just one year since sports betting operator Parimatch partnered up with mixed martial arts organisation Ultimate Fighting Championship (UFC), but as is the case for fighters in the octagon, progress can be made very quickly with the right mentality.

And sure enough, since July 2018, both UFC and Parimatch have been on the offensive, the US-based MMA company making its first strides into Russia to hold the most attended fight night of the year; Hunt vs. Oleinik. On 15 September last year, 22,603 people crowded into the Olimpiyskiy Stadium in Moscow to see local hero Aleksei Oleinik square off against New Zealander Mark Hunt, the Russian effortlessly shrugging off a heavy left hook before taking Hunt to the ground and finishing the fight with a rear-naked chokehold only 4 minutes 36 seconds into the first round. His 45th submission win in his UFC career, the victory earned Oleinik ‘Performance of the Night’ and an increased profile as one of the sports toughest competitors. The heavyweight icon’s fighting spirit didn’t go unnoticed by his countrymen and women at Parimatch, who announced Oleinik as an ambassador last April, joining the ranks of former featherweight and lightweight champion Conor McGregor, who signed with the operator in early February.

In a year where UFC smashed its previous pay-per-view record by 800,000 as October’s Khabib vs. McGregor fight night hit 2,400,000 views, Parimatch broke records of its own; the same fight bringing in more new players for Parimatch than any other sporting event last year. However, the sports betting operator’s close connection with UFC is about more than just increasing the number of bets the operator takes on each fight night, with CEO Sergey Portnov explaining that the partnership “reflects our spirit and can help to elevate our brand identity”. Portnov believes the sport of MMA and Parimatch to be synonymous, seeing the same qualities of freedom and courage in both sports bettors and octagon brawlers. In fact, this is a belief that permeates throughout the entire Parimatch team, with CMO Tamara Babits spelling out just how deep the company intends its bond with UFC to be.

“This partnership is not just a partnership in the name of business. For us it is a merger of brand ideologies. We want to build on this connection. Parimatch is agile and very open to growing with the UFC to become one of the strongest players in our industry,” she explained. “For me the UFC sponsorship is about our proof of positioning in the market as the most daring betting brand. UFC hasn’t traditionally lent itself to betting. However, we are now finding an increase in the volume of bets. The growth in the amount and number of bets December 18 – May 19 (6 months) compared to June 18 – Nov 18 (excluding the Habib-McGregor fight) was 53 percent.” Indeed, while it may have only been a year since Parimatch joined forces with UFC, the similarities and synergies between the two brands has so far proven to be grounds for the perfect partnership – and one that seems destined to go all five rounds.