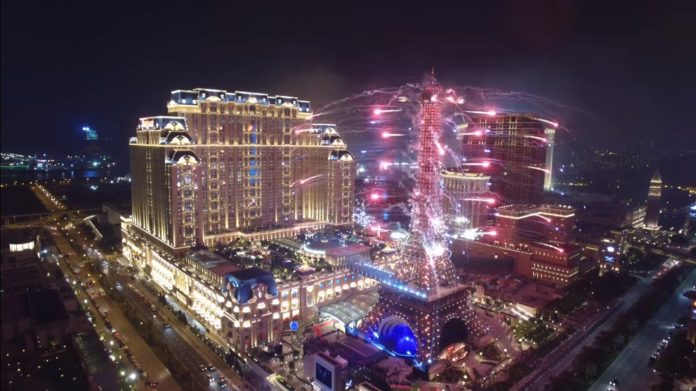 The fifth Macau casino from Sands Corp is now welcoming customers – with casino mogul Sheldon Adelson hinting that more themed resorts may well be on the horizon.

The property boasts a half-size replica of the Eiffel Tower, a water park, hundreds of retail outlets, a theatre, and hotel capacity of 3,000 individual rooms. As for its gaming floor – Sands executives were disappointed when they were informed (just weeks before the official launch) that the new development would receive table allocation of just 150 new units – but have transferred 360 tables from the company’s four existing Macanese properties to bring the total count to 410.

At the opening ceremony, Sands founder and CEO Sheldon Adelson underlined the Parisian’s entertainment-orientated, mass-market focus – and renewed his commitment to the city’s economic development.

“The mass market will always be here and that is why we built these giant integrated resorts,” he remarked. “If the government is listening – please note: we are interested in building more here.”

The Parisian opens just weeks after the ribbon was cut on another major US-backed venture – the $4.2bn (E3.7bn) Wynn Palace from Wynn Resorts. With its boutique retail outlets, luxury restaurants and ornate artistic and floral displays – the Wynn Palace differs markedly from the Parisian in almost exclusively marketing itself to the city’s (increasingly elusive) high-end visitor-base.

Meanwhile, the Parisian represents Adelson’s fifth commercial venture in Macau – where his company has invested upwards of $13bn (E11.6bn) since 2004.

But based upon the pre-bookings we have, [and] the convention bookings we have…I think we will go up gradually.  Macau still has very good days to come.

As for the prospects of the Parisian, Adelson claimed that he was “confident” that Macau’s gaming recession had “hit the bottom,” but was open about his uncertainty with regards to the longer-term picture.

“Now, is it sustainable for a long time to come? I can’t answer that question,” he stated. “But based upon the pre-bookings we have, [and] the convention bookings we have…I think we will go up gradually.  Macau still has very good days to come.”

With its French thematic, the Parisian Macao is the second of Sands Corp’s Asian casino resorts to draw upon European destinations for inspiration: the Venetian Macau opened in 2007 – and was closely modelled on its faux-Venice sister property in Las Vegas.

In discussion with assembled press last night, Adelson suggested that he would consider yet more iconic travel destinations as the basis for future Sands ventures in Macau.

“I might do something for London, or something from the States like San Francisco,” he said. “We wouldn’t build a thematic property if we didn’t feel this would truly attract people…in proportionately higher numbers than non-thematic properties.”