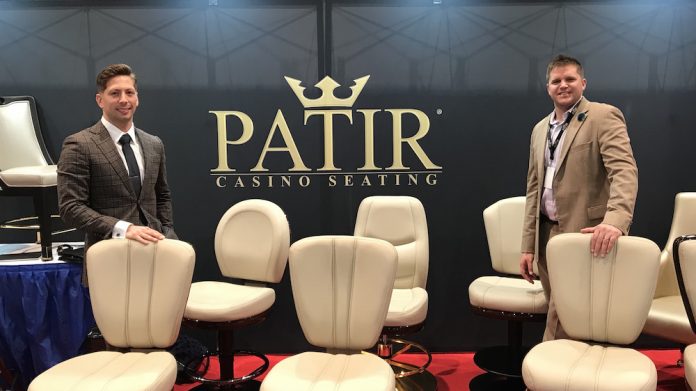 Following a successful showing at the Indian Gaming Tradeshow and Convention, International Casino Review caught up with Jim Keranen, Patir’s new VP of Sales and Marketing to discuss the company’s new line of US-focused seating solutions.

While a well-known name in Europe, Patir is a relatively new player in the US seating market, with the company opening its first North American office in Las Vegas back in 2016.

Despite this, in the space of just two years, steered by CEO Dennys Patir, the company has moved quickly to ramp up its US business and has recently appointed Jim Keranen as VP of Sales and Marketing.

“The gaming industry has always been kind of interwoven through my career path and I’ve been involved in the sector for several years now,” Keranen explained. Having previously worked for parts and components distributor Suzohapp, Keranen was drawn to Patir by the company’s family ethos and commitment to providing a quality product and service.

“When I met Dennys I quickly realised that we share a similar background and values,” he stated.

“So when he invited me to help build the Patir brand in the US, that seemed like a great opportunity to help write the American chapter of the company’s success story.

“During the first tradeshow we did together, I heard one client describe us as ‘the Patir guys’. It’s really cool that customers have picked up on that sense of camaraderie we have in the company and I’m proud to be a part of that.”

Tribal gaming is the fastest growing segment of the industry in the US and reflecting this, Patir
seized the occasion to debut its new seating range, dubbed the ‘American Line’, at this year’s Indian Gaming Tradeshow and Convention in April.

“The Patir brand name is very established in Europe, what we’re looking to do in the US is develop that brand recognition, so that people instantly recognise our products based on their quality and the strength of our designs,” Keranen continued.

“With our American-style chair, Dennys spent a significant amount of time testing and refining it, working closely with a couple of casinos to really fine-tune the design to American player preferences.

“In the US the focus is always on comfort and at the end of the day, player retention is the name of the game. We want players to sit in our chairs as along as possible.”

Keranen reports that the new seating line was well received at the show, while Patir is now preparing to present its products at G2E Las Vegas this October.

“The casino furnishings industry in the US is all about relationships, we’ve already made a number of inroads and we’ve got some terrific opportunities and some great projects that we’re starting to work on,” he added.