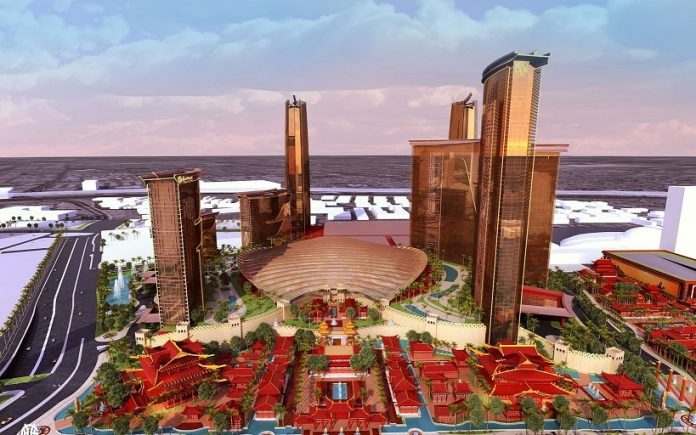 After a year of little movement, Malaysia’s Genting Group will ramp up the development of Resorts World Las Vegas over the coming months.

[dropcap]C[/dropcap]onstruction of the $4bn (E3.5bn) Resorts World Las Vegas will ramp up in the final quarter of 2016, an executive affiliated with the project told Nevada gaming regulators in May.

Appearing before the Nevada Gaming Control Board a year after the project held its official ground-breaking ceremony, Resorts World General Counsel Gerald Gardner said construction would get underway in earnest in the last three months of the year.

While Genting Group – the Malaysian conglomerate behind the development, and one which already operates numerous Resorts World-branded leisure properties around the world – originally said the Las Vegas resort would open in 2018, Gardner said the project should be finished in early 2019.

In an interview with local press after his remarks to the board, Gardner attributed the delay to ongoing work on a “complex design”. He said struggles in the Chinese economy and with Malaysian currency had also affected the timeline.

Resorts World Las Vegas sits on a prime parcel of land where the Stardust resort once stood on the north end of the Strip. Genting bought the site from Boyd Gaming Corporation in 2013, after the regional casino operator abandoned plans to open a new casino there in the wake of the economic downturn. From the outset, Genting underlined the Chinese-themed elements of Resorts World Las Vegas. The resort will feature 3,000 hotel rooms, a 56-storey tower, a 150,000sq.ft casino and “rich cultural attractions, varied cuisine and jaw-dropping entertainment from China’s many diverse regions and ethnic groups”.

At the ground-breaking ceremony on May 5 last year, KT Lim, chairman and chief executive officer of the Genting Group, said: “Las Vegas is known for its world-renowned resorts, and the Genting Group looks forward to being a part of the city’s continued growth by creating a huge national and international draw with this Chinese themed world-class resort.”

Once building activity is in full swing, Resorts World is expected to create about 5,000 direct construction jobs, Gardner said, adding that the resort will have about 2,500 full-time employees at opening.
“Not since the 1950s has there been the amount of development that we are currently seeing on the north end of the Las Vegas Strip, and Resorts World Las Vegas is positioned to be the centrepiece of this exciting growth,” said Clark County Commissioner Chris Giunchigliani. “The Genting Group is poised to create a truly special international destination. On behalf of Clark County, we wish them much success.”

Last year marked the Genting Group’s 50th anniversary as a leader in the global travel and leisure industry. The company pioneered the concept of integrated resorts where numerous entertainment, shopping, dining, golf, accommodations options and a world-class casino experience all serve to meet guests’ wide variety of wants and desires – at all price points and for all market segments.

With operations in seven countries around the world, Genting properties host over 50 million visitors annually.