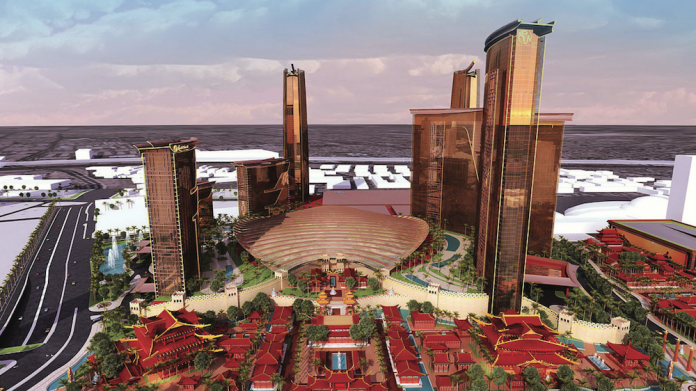 The much-delayed Resorts World Las Vegas looks set to open-doors within two-years, despite an ongoing US- China trade war which may well target its primary market.

Resorts World Las Vegas is still on track for a 2020 opening, claim Malaysian Genting developers the Genting Group – despite concerns that deteriorating relations between the United States and China could cause even more prospective delay.

Constituting its first ever landed entry into the Nevada market, Genting paid $350m (E305m) to Boyd Gaming for the 87- acre former site of the Stardust Casino over five years ago, and initially planned to have construction completed by 2016. But despite a ground-breaking ceremony taking place in May of 2015, subsequent signs of construction have been scant at the North Strip locale – with Genting largely silent as to the long-term prospects of the venture.

Work has now resumed apace, however, with Genting attributing the delays to logistical difficulties pertaining to the construction of the $4bn (E3.5bn) resort, as well as to downward fluctuations in the value of the Malaysian Ringgit.

Thus, despite some calls of alarm regarding the ongoing trade-war between the White House and Beijing, representatives from Genting have given investors assurances that they are now “highly confident” of a 2020 opening.

Industry analysts the Union Gaming Group have weighed in on the news – claiming it to be indicative of careful calculation on the part of Resorts World higher management.

“I think the pace that we’ve seen Resorts World approach construction is very deliberate,” remarked John DeCree, head of the consultancy’s North American equity team. “They are understanding the market and really calculating what they need to build and how they need to position that property to be competitive with the Las Vegas Strip, which is historically very competitive with some of the best casino companies in the world.”

Still, with Resorts World Las Vegas squarely targeting a Chinese and Chinese- American demographic with its thematic, aesthetic and culinary offerings, the reinforced timeline may well leave some investors feeling far from reassured. After all, in the year to date, both the United States and China have levelled punishing tariffs on up to $34bn (E29.6bn) of each other’s goods – with little sign of de-escalation in the near future.

In the recent past, the Chinese government has been unafraid to punish adversaries in the wallet by restricting the travel access of its massive tourism market to other parts of the world. Such measures cost the South Koreans in excess of $6.8bn (E5.92bn) in 2017 alone, when Chinese tourist footfall nose-dived by 60 per cent after Beijing forbade its travel agents from selling Korean package tours. The move was in response Seoul’s support of a new US anti-missile system within South Korean territory.

Whilst there is little to suggest that such drastic measures are being considered in the current dispute with president Trump’s administration, the prospect alone raises questions for stakeholders in Genting’s new flagship American destination.

“Travel restrictions might not be significant to Vegas overall, since Chinese visitors to the city are less numerous than those from other countries,” director of the University of Nevada Las Vegas’ Center for Gaming Research David G. Schwartz told International Casino Review.

“[But] it might seriously impact the prospects of Resorts World Las Vegas, which as far as I know is planning to cater to this exact travel segment.”