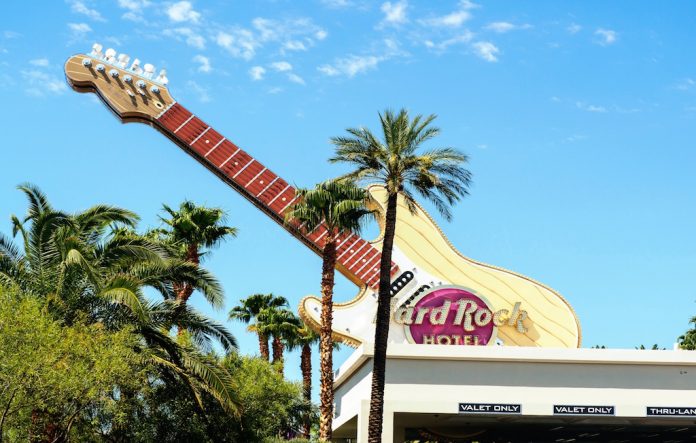 The billionaire founder of the Virgin Group, Richard Branson, has bought the Hard Rock Casino and Hotel in Las Vegas, while the property’s current casino management company, Warner Hospitality, will lease the casino portion of the business.

In late March, Richard Branson, founder of the Virgin Group, announced that his company had purchased the Hard Rock Hotel & Casino in Las Vegas, with plans to transform the off-Strip venue into a Virgin Hotel.
Virgin Hotels purchased the property with a group of partners including Bosworth Hospitality Partners founder, Richard Bosworth, the hotel’s new CEO; Los Angeles-based investment firm Juniper Capital Partners; and Toronto real estate firm Fengate Capital Management.
The 1,500 room and suite hotel will continue to operate as the Hard Rock until rebranding into Virgin Hotels Las Vegas is complete in late autumn 2019.
“We’ve looked at a variety of locations around Las Vegas over the last six or seven years since we launched Virgin Hotels as a brand, and we always wanted to make sure that we had a destination location, and someplace that we could really carve out and make special the Virgin way,” explained Virgin Hotels CEO Raul Leal, speaking to the media. .
“And we’ve always really loved that building – it’s got an amazing layout and Hard Rock is an iconic brand. “We love that it’s off the Strip because we believe that we’ll still also cater to the people who go to the Strip but also cater to locals, which is a big part of our strategy.”
Under the new ownership structure, the Hard Rock’s current casino management company, Warner Hospitality, will lease the casino from the property’s owners.
“In this case the landlord is really a new financial structure,” Bosworth stated. “What we have learned is in the capital markets if you look at the 30-year borrowing rates in the state of Nevada for the casino industry versus what it is for hospitality as an example, there’s a difference of 400 basis point spread for your borrowing costs.
“So, when you structure it financially as a casino lease – and it is a casino lease – what you’re doing is basically being able to access capital and the capital markets to acquire [the funds] to renovate.
“For us, we wanted to make sure that we had a capital smart and a real estate smart acquisition, so we can spend hundreds of millions of dollars to transform the property,” he added.
In 2006, Hard Rock Café founder Peter Morton sold the property to Morgans Hotel Group in a $770m deal, but in 2011, Morgans surrendered control of the property to partner Brookfield Asset Management, citing the high debt on the property in the face of the economic downturn.
The cost of the deal is unknown, but Branson told the Associated Press that he plans to invest “hundreds of millions of dollars” in renovations to the 23-year-old property.
“The guitar may not survive. But we have a giant ‘V,’ which is sort of guitar-shaped, which may take over,” Branson stated.
The rebranded hotel will have 1,504 rooms, suites, and penthouse suites, while there are plans to fully renovate the 60,000sq ft casino. The re will also be “multiple pools over five acres,” along with seven new restaurants and three nightclubs and bars.
“My favourite hotel [in Las Vegas] for many years has been the Hard Rock. It’s been allowed to get a bit tired over the years, but it’s got fantastic staff and that’s the absolute key,” Branson stated.
“It needs a lot of money spent on it, and we’ve been experimenting on people in Chicago, and we’re about to experiment on people in San Francisco, and we have lovely boutique places around the world – so we think we’re ready now to put some magic back into this property.”
Bosworth stated that additional details will be forthcoming in three month time, that will further elaborate on investors’ plans to help the property become more competitive in the convention and meeting market.
“The property does have strong occupancy Sunday through Thursday,” he stated. “But we will be tapping into one of greatest conference and meeting networks in the world that will be affiliated with us and Virgin to drive strong convention conference business. And that will give us a much more profitable lift.”