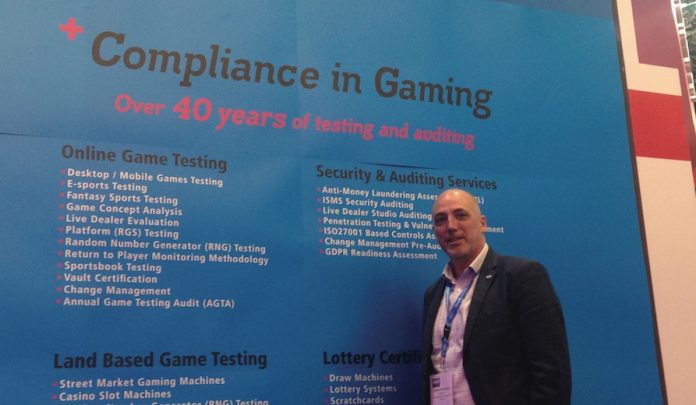 Choice of new markets is an important consideration for operators, but for Andrew Rosewarne, director at global test labs NMi, ensuring the company has access to the rapidly growing list of igaming jurisdictions is essential.

Few businesses in the global gaming industry need their fingers more firmly on the pulse of emerging jurisdictions than test labs.

As worldwide director at global test lab, NMi – one of only three core competitors in the global market – Andrew Rosewarne spearheads the company’s efforts to stay ahead of the curve.

“We now cover 30 jurisdictions for igaming, and there seems to be another one coming along every couple of months now. ”

Rosewarne stated. Liberalisation of igaming has accelerated to a formidable pace, but while this brings clear business benefits, failing to keep up with the demand to enter these new markets can be fatal.

Once a new jurisdiction opens, operators must first wait for test labs like NMi to be accredited before they themselves can be certified to be there. The longer this process takes, the higher the opportunity costs become,

“It’s quite capital intensive for us to get approval for a new lab in one of these jurisdictions,” said Rosewarne. “Gaming regulators see labs as even more high risk than the licensees because we are the gateway for certification.”

Wherever new jurisdictions emerge, NMi aims to be there and the firm strives to be flexible enough to adapt to whatever the market conditions may be, however market openings are not always easy to forecast.

“Four years ago everyone was saying the Netherlands was going to be it and since then we’ve had Colombia, the Czech Republic and a raft of Eastern European countries.

“So it’s just not that easy to predict, but you have to be quick to react and have the investment capital to be able to do it.”

Rosewarne is similarly cautious about the US following a brief surge a few years ago when New Jersey, Nevada and Delaware all regulated igaming in a fairly short period of time.

“I think most people would have told you then it was going to go like dominos, but now nothing has happened for three of four years,” he goes on. “And of course with everything else going on in America, it’s a little unpredictable at the moment.”

Despite these factors, guaranteeing that NMi will be there when the time comes is central to the company’s philosophy.

“Like everybody we compete on good service, our accuracy and timeliness, and providing that full coverage creates confidence in our company,” Rosewarne concluded. “It’s important to be sure that your chosen lab is going to keep up with the demand and that’s our commitment to our customers.”