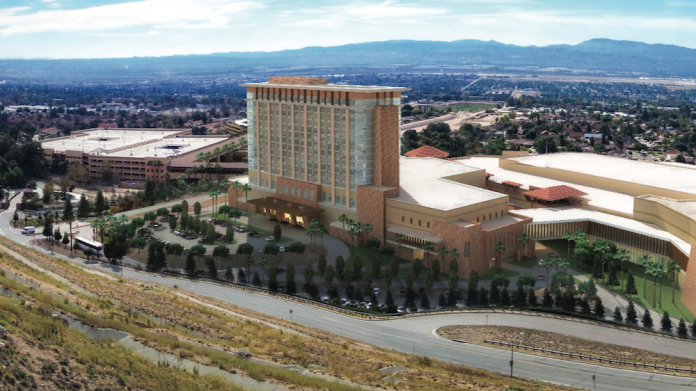 Ground has been broken on a new $550m (E470m) hotel expansion at the San Manuel Casino in Southern California – representing the latest in a wave of big-budget redevelopment efforts throughout the region.

The new hotel is set to house 450 rooms across seventeen stories, and will also include a 3,000-seat entertainment venue, spa and pool complex, and a number of new restaurants.

The tribal gaming destination, located just north of San Bernardino, was once a humble bingo hall – but today boasts one of the most competitive gambling offerings on the market, operating 4,800 individual machines through- out its recently-expanded gaming floor.

Indeed, construction work on San Manuel’s upgraded floor came to an end less than a year ago -but manager Loren Gill has said that the addition of an on site hotel is a necessity for the property to remain competitive.

“San Manuel has always been a locals and regional casino and we don’t have a hotel,” he told The San Diego Union-Tribune. “It’s something very obviously missing from our casino experience…there are people who tell us ‘we prefer to somewhere else’ because they want to spend the night.”

With the overnight facilities in place at San Manuel, customers will certainly be spoiled for choice when it comes to tribal IRs within spitting distance of San Diego and Los Angeles. This summer saw work completed on new facilities at the Pechanga Resort & Casino in Temecula which doubled its room- capacity to 1,090 – making it the largest gaming resort on the west coast. To the south, the Pala Casino Spa & Resort just finished adding a new pool area to its existing 500- room hotel, which itself is slated for remodelling in the coming months. In the Palm Springs area meanwhile, San Manuel has earmarked its leading desert competitors as Morongo Casino and Agua Caliente Casino Resort Spa which together bring to bear the draw of 650 overnight rooms.

The sheer amount of cash being thrown-around SoCal’s tribal sector in recent months has raised fears of over-saturation, to the extent that management at Pala has put on hold plans for what was slated to be a new $170m (E145m) hotel-tower. The resort’s VP of hotel operations Has- san Abdel-Moneim has acknowledged that the deferment was due to “movements in the market, with Pechanga’s expansion and San Manuel doubling up on gaming.”

Nevertheless, the growth-surge accurately reflects the rude health of the state’s tribal market. According to latest figures from tribal regulator the National Indian Gaming Commission (NIGC), FY 2017 saw California revenue grow by over 7 per cent to total $9bn (E7.7bn): or just over a quarter of the national tribal picture.