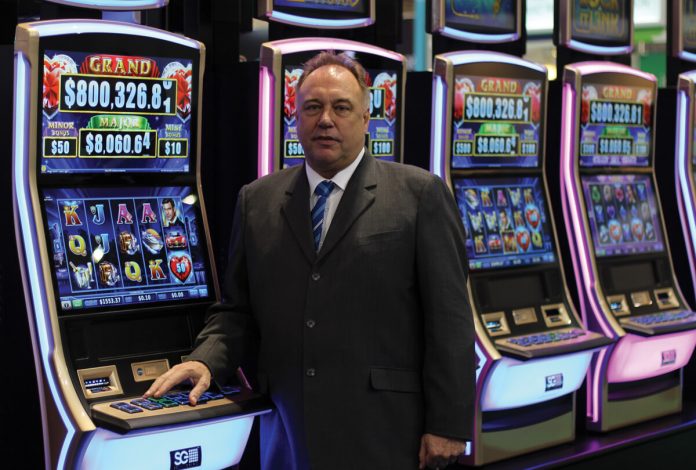 At this year’s G2E Asia, Scientific Games unveiled a diverse range products and system solutions from the group’s array of top brands.

“The Dualos cabinet had previously been launched in Australia, and is now here in Macau,” said Ken Jolly, vice president and managing director of Scientific Games’ Asia operations. “Dualos is our third active cabinet in the Asian marketplace, following the Pro Wave and the Equinox before that. It supports a rich library of Bally, Shuffle Master and WMS content, and is due to go into some other markets later this year.”

“We have lots of R&D going on around the world, and we are now developing products more specific to regions,” Jolly stated. “For instance, in Asia-Pacific we have a studio of more than 40 people in Qingdao and we also have a studio in Australia. We can put any of our games into any of our cabinet platforms and tailor them to the market.

“One of the things we find in Asia is that we need a lot more volatility in the games. Hence the success of Da Fu Da Gui and Duo Fu Duo Cai. These products are culturally sensitive for the Asian market, and we have got the maths models right in those products.”

Jolly added: “Duo Fu Duo Cai, which we launched in Asia nearly three years ago, has gone around the world. And wherever we’re putting it, it’s game number-one. There is a lot of debate about why it performs so well, but if you look around the world there are a lot of Asians who love to gamble – whether you are in Las Vegas, Europe or Australia.”

Scientific Games’ latest innovations were joined by a range of proprietary table games at G2E Asia this year, including Jackpot Baccarat Progressive, Zappit Blackjack and Two for the Show. In addition to its new slots and table game offerings, the company also showcased a range of utility products, such as U-Spin Roulette, i-Score Roulette and Safe Bacc.