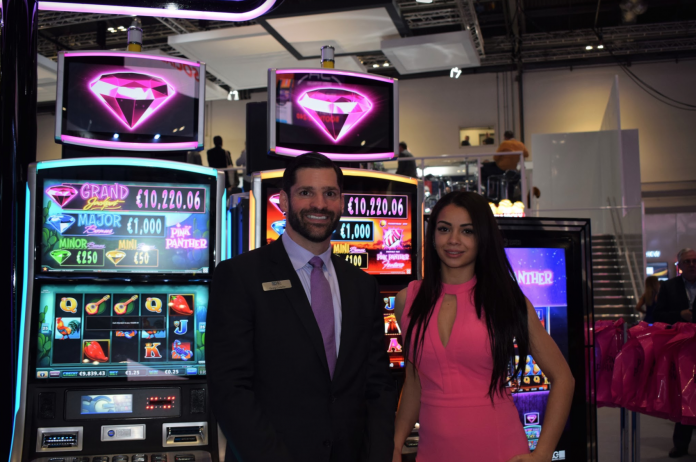 Scientific Games’ VP of Product Marketing, Greg Colella, explains the company’s new market specific content focus, highlights the success of the TwinStar J43 cabinet, and discusses the factors which have lead ETGs to become one of the fastest growing segments in the industry.

International Casino Review: What are the key product focuses for Scientific Games at this year’s ICE?

Greg Colella: We have a couple of products specifically for international markets that we’re debuting at ICE. The first are the Pink Panther games which we’ve displayed front and center this year. These games were designed by our Australian studio, with our international customers in mind.

We’ve seen a lot of success from our Australian studio with some of the products they’ve been developing like the Lock It Link series, while their Asian sister studio created the 88 Fortunes games.

So we’ve had them develop the Pink Panther series of games – with Mega Mariachi and Kalahari King as the first titles – which are multi-level progressives and multi-denoms, and we are planning to add further themes to the family down the line.

We’re optimistic about the series, and the Pink Panther brand has done particularly well internationally, so I’m confident that it’s going to be another strong product line for us.

We’re also debuting another game built by our Australian team, Monopoly Grand Hotel, at ICE. When they launched that title in Australia last year it became the biggest seller in that market, so we’re optimistic that we’ll start to see the same thing here.

We’ve taken the approach with Pink Panther and Monopoly that we’re building a strong base game for the international player and wrapping the brand around that, rather than offering the big top box games with bells and whistles which generally don’t fit very well in many casinos throughout Europe and other parts of the world.

We’re taking more of a measured approach to launching our products in casinos in Europe where we build an international game on a platform that makes sense for that market, and I think we’ll see success with that strategy.

We’re also seeing great success with our TwinStar J43 cabinet, both in the domestic U.S. market and internationally and I think that’s going to be a strong platform for us across the world.

The TwinStar J43 is well on the path to become a top-selling cabinet, and we’re fortunate enough that almost every game we put on there has been an outstanding performer.

In the U.S. we’re seeing customers that originally decided to buy 10 or 12 units, coming back and saying we need another 12 more.

ICR: What are you showcasing for the table games segment this year?

GC: On the table games side we have Zombie Blackjack, which we first debuted at G2E. Blackjack is now the most popular table game in the world, so obviously blackjack variations are very appealing.

We also have our Face Up Pai Gow Poker game which is commission free, so you’ll be able to see exactly what’s in the dealer’s hand. It takes a couple of the barriers away from a Pai Gow game, which can be a bit tough for new players to get into, and the commission discourages a lot of people.

We also have the new ShuffleStar which is our latest continuous shuffler.

We also have the capabilities of our Nexus Game Manager 2 Progressive Solution which allows us to link our table games, creating wide area progressives. While linked progressives are something which is now common in the slots sector, it’s still fairly new on the table side.

Looking to the electronic table games (ETG) segment, we have a couple of solutions we’re spotlighting this year, including the PRIZM GameTable, with the Lighting Launch Roulette theme.

We now have GLI approvals for this and it will start to appear in casinos in North America in the next month or so.

The PRIZM GameTable is something of a hybrid, combining elements of an ETG with aspects of a slot machine, and we do plan to have slot content on it down the road.

So, from that point of view, you’re not just buying an ETG, you’re really buying one of the most flexible and innovative platforms in the industry.

ICR: In your opinion can ETGs be a good entry point to attract more people to play table games?

GC: That is really the story for EGTs. I remember this from my days at Shuffle Master. There were so many people that were intimidated to sit down and play table games.

ETGs create a less intimidating environment to learn the ropes of those games and find out more about how they work. They’re a great bridge, but they’re also becoming a solid piece of the business, and they’re one of the fastest growing segments we have right now.

Another key point is that they allow operators to offer lower stakes. When you look at some of the bigger markets they can’t offer lower limit blackjack games, but ETGs allow you to run a $1 or $2 blackjack game, when the labour costs in many markets would make that impossible otherwise.

ETGs also allow us to add in a number of other side bets to those games. This is key because – given that blackjack has a very low house advantage – even if you can afford to run a $1 blackjack game, it’s debatable whether you’d actually want to. These side bets offer the operator the opportunity to recoup their investment.

We’ve found that one of the things that make these games successful is people engaging with those side bets; that really starts to change the dynamics for the operator.

ICR: What is Scientific Games highlighting at the show in terms of systems?

GC: On the systems side we’re excited about the new iVIEW 4. iVIEW is our next-generation display hardware that enables on-game marketing promotions. We can either install an in-game display or take over the main screen depending on what the customer wants. We’ve done that for a while with multiple versions of iVIEW and the latest version has more memory, better graphics, and more powerful processor, but that’s not what the conversation is about.

With the iVIEW 4, the key point is that we’ve moved to an open development environment, all content is created with HTML 5.

It offers people a familiar environment in which to create their marketing applications.  It eases the transition and it will allow them to develop marketing campaigns for online and casino environments.