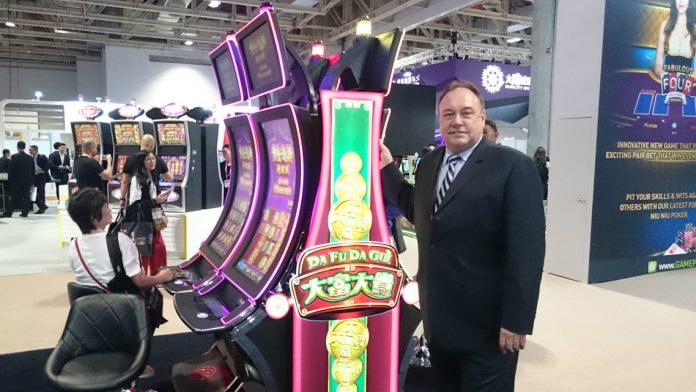 Speaking at the Scientific Games stand at MGS, vice president and managing director for Asia Ken Jolly explained the company’s success in Macau and identified new opportunities arising across the continent.

[dropcap]S[/dropcap]howing off its new slots Da Fu Da Gai and Lock It Link, Scientific Games was at MGS following another strong year in the Asian market.

The company, which made major acquisitions in WMS and Bally in recent years, has steered a steady course over 2016 and is eagerly anticipating new opportunities it has identified throughout the continent.

Ken Jolly, Scientific Games’ vice president and managing director for Asia, commented during MGS:  “It’s a year where the company’s been stabilised after buying different companies the last few years prior. It’s certainly been very positive in the Asian market overall, we’ve got new openings not just here in Macau but in the Philippines and in Korea in the future. There’s also a couple of new markets opening in Saipan and Vladivostok.”

Scientific Games’ new products have made a good start in the region, however Jolly explained that it was a product not on the MGS stand, Duo Fu Duo Cai, that has led the way for the company in the Macau market.

Jolly explained: “The product we don’t have on the stand is Duo Fu Duo Cai which was actually designed specifically for the Macau market. However, when we saw the strength and performance of Duo Fu Duo Cai we saw it could carry around the world and it’s on all continents now.”

We’re seeing the drop off of the junket player on the tables and the markets moving much more to a mass market.

The company followed Duo Fu Duo Cai up with Da Fu Da Gai, which Jolly explained has done well in the Philippines and is now getting installed in Macau. Also only just approved for Macau is Lock It Link, for which Jolly had great expectations following a strong debut in Australia. While the slot side of the business thrives, Jolly commented that with Macau moving more towards the mass market, the allowance of some different table games could benefit casino revenue.

“We’re seeing the drop off of the junket player on the tables and the markets moving much more to a mass market. This is exciting because the masses earn a better premium especially on the table side of the business. The only thing that’s letting the market down a little bit is the number of type of table games that we are allowed. There’s baccarat, casino war and three card poker, but there’s lots of other types of games or spin offs of games that could be here that haven’t been allowed in the market yet. That would certainly help drive the mass market in my belief, and that allows us also to bring some of those games and sidebets onto electronic gaming as well.”