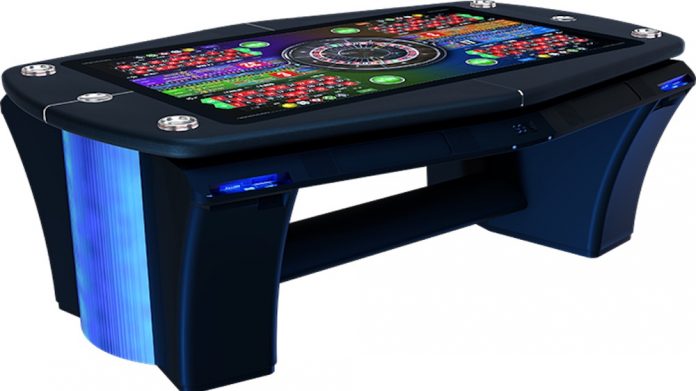 Scientific Games Corporation has launched its first ever land-based PRIZM GAMETABLE installations at Harrah’s Atlantic City and Bally’s Wild Wild West in New Jersey. These units feature LIGHTNING LAUNCH Roulette, a new spin on the classic table game that allows up to four players to become involved in a social and interactive gaming experience. LIGHTNING LAUNCH Roulette is the award winning debut title on the new PRIZM GAMETABLE.

“Harrah’s Resort and Bally’s Wild Wild West are thrilled to be the first land-based casinos in the world to install the PRIZM GAMETABLE product here in Atlantic City,” explained Kevin Ortzman, Regional President for Caesars Entertainment. “Caesars has long been committed to offering our guests the latest in gaming innovation, and we are excited to once again be first-to-market with an exciting new product like the PRIZM GAMETABLE as we head into our summer season.”

LIGHTNING LAUNCH Roulette plays similar to traditional roulette. However, in this interactive version, players are able to launch their own ball at the completion of wagering. Players also have the option to bet on their own roulette ball, as well as placing a $1 bonus wager on up to all 38 straight numbers to get action on any or all of the four balls in play.

In addition to LIGHTNING LAUNCH Roulette, the PRIZM GAMETABLE will soon feature REVOLUTION REELS™ and MONOPOLY Evolution. This revolutionary product and its debut title have already received industry recognition, including the 2016 Gaming & Technology Award for “Best Table Game Product or Innovation” (PRIZM GAMETABLE) and a spot in the 2017 Casino Journal Top 20 Most Innovative Gaming Technology Awards (LIGHTNING LAUNCH Roulette).

The PRIZM GAMETABLE is scheduled to install across North America as 2018 progresses. The secondary titles REVOLUTION REELS and MONOPOLY Evolution are set to launch in mid to late 2018.

“We are thrilled to announce our first ever land-based installs of the PRIZM GAMETABLE in New Jersey. We believe that this product is a game-changer and will help promote the social aspect of casino gaming in the industry,” said Derik Moobery, Scientific Games’ Group Chief Executive, Gaming.