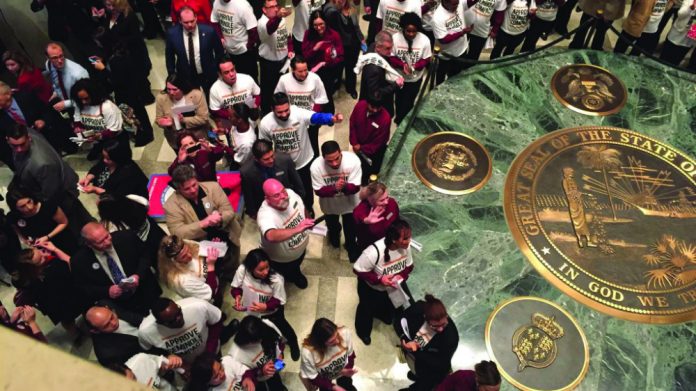 Following a year-long court battle, a federal judge has ruled that the Seminoles can offer blackjack and other banked card games exclusively until 2030.

[dropcap]A[/dropcap] federal judge has ruled in favour of the Seminole Tribe in its legal struggle with the state of Florida, allowing the tribe to continue to offer blackjack and other banked card games for the next 14 years at its seven casino venues.

US District Judge Robert Hinkle ruled that the state of Florida broke an exclusivity deal which formed part of the 2010 Seminole Compact with the tribe.

“The Seminole Tribe is very pleased with Judge Hinkle’s ruling and is carefully reviewing it,” said Tribe spokesman Gary Bitner in a written statement. “The Tribe believes the ruling provides for its future stability and ensures 3,600 Seminole gaming employees will keep their jobs.”

In 2010, the Seminoles and the state signed a 20-year gaming compact that allowed the tribe five years of exclusivity over house-banked card games, for which the state received $1.7bn (E1.6bn) in revenue sharing.

However during this period the state authorised state horse and dog-racing tracks to offer the designated-player games at their cardrooms, causing the tribe to accuse the state of reneging on the deal.

In his 36-page ruling, Hinkle concluded that the state had violated the terms of its compact with the tribe by allowing pari-mutuel gaming operators to offer ‘designated-player’ card games.

These games feature one player at each table nominally acting as the house, however in practice the role is generally farmed out to third-party companies.

Hinkle called some of these games an “egregious example of the cardrooms’ attempt to evade the prohibition on banked card games” and said that racetrack card rooms’ versions of Ultimate Texas Hold ‘em, three-card poker, and Pai Gow cut into the 20-year monopoly the tribe negotiated with the state.

Based on his findings the judge ruled that the tribe is now authorised to conduct blackjack at all seven of its casinos, including those near Hollywood and in Coconut Creek, until the end of the agreement in 2030.

Florida’s card rooms had argued that the games were a class of poker, defined as player vs. player, as opposed to banked.

Offered in roughly half of the card rooms in the state, these games take in an estimated $15m (E14m) of the state’s $147m (E137m) annual poker revenues.

It is unclear how the ruling will affect negotiations to update the Seminole agreement, the tribe was to enter into negotiations after five years, when its exclusivity on blackjack ran out.

Last December, Florida Gov. Rick Scott worked out a deal that would allow the Seminoles to add roulette and craps, while allowing South Florida’s racetrack casinos the ability to offer blackjack, but it did not get past the state legislature.

However given this month’s ruling, the tribe now negotiates from a considerably stronger position.