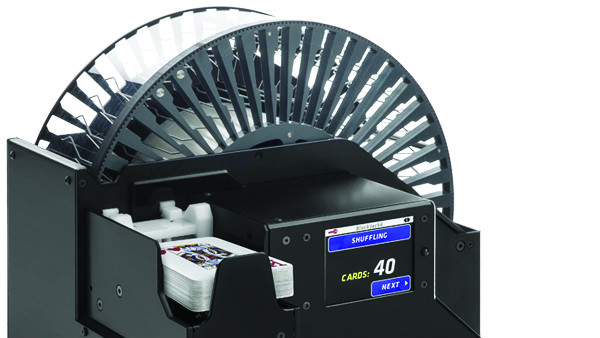 Shuffle King have made the transition into Asia with consummate ease, and they have every intention of shuffling the marketing pack with the same sense of dexterity as their latest range.

Now, after three years of development they are setting their sights on the Asian market, presenting their new Shuffle King 8 at this November’s MGS Entertainment Show.

Their latest product shuffles eight decks of cards simultaneously and is allowing the company to tap into the popularity of baccarat in the Asia.

Zbynek Matejka, sales manager at The Shuffle King Company, affirms that MGS offered a great opportunity to network in the region. “We can see that the shuffling machines are all around Macau,” said Matejka. “Also over countries like Philippines and Cambodia too, additionally at MGS we are getting quite a few good contacts for both the Macau market and other countries like Malaysia.”

Our technician will kill me, but the sky is the limit.

The transition across continents seems to have been, well, seemless. The company has encountered no significant issues in adapting to the different regulatory frameworks found in the Asian markets, as Matejka confirmed: “There is only the main requirement from GLI to prove it is truly random. That has been proven, tested and we have the certificates.”

Not content to rest on their laurels, Shuffle King are already exploring the possibilities of expanding their machines to carry more decks.

Matejka noted the constant development of men’s razors as an unlikely source of inspiration for the project.

“Companies keep adding the razors, when they started there were two, now there are eight or nine. Shuffling companies are doing the same, so we will also go further.

“Our technician will kill me, but the sky is the limit,” he added.