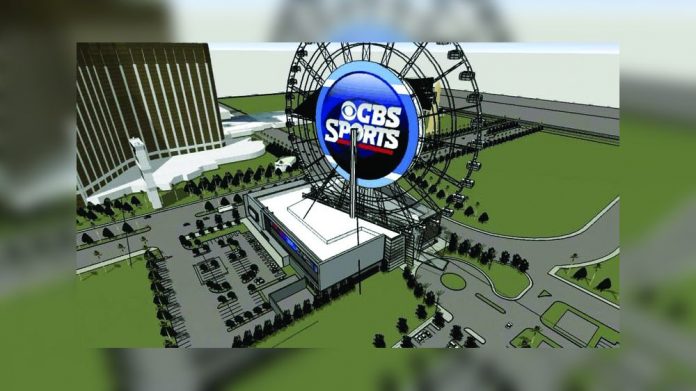 The parcel of Las Vegas Boulevard land containing the abandoned SkyVue observation wheel project is once more up for sale, with brokerage firm Keen-Summit Capital Partners confirming the 38.5 acre site will be sold as part of a bankruptcy auction on 19 May.

The site, located immediately opposite the Mandalay Bay, is offered without asking price, with Howard Bulloch of Compass Investments forced to sell after US Bankruptcy Judge Gary Spraker approved bid procedures last month.

“The time is now, the property has to sell,” said Keen-Summit principal Matt Bordwin. “There’s nothing like it.” A multitude of possibilities have been proposed for the site throughout its history, with Bulloch and business partner David Gaffin initially pitching a London-themed 77 acre World Port Resorts project in 2001.

However, it is the concrete remains of the 500 ft observation wheel Bulloch announced in 2011 that still mark the property out.

Originally titled the SkyVue Las Vegas Super Wheel, the project stalled in 2012 after financial issues blighted construction, forming the cornerstone of the $13m bankruptcy claim by a petitioner filed in 2018.

The same year saw Bulloch and Gaffin agree a $415.8m price for the property with a group of unnamed investors, represented by Atelier Real Estate Partners managing principal George Villar, with plans afoot for a new resort hotel.

However, the much-anticipated deal was never finalised, with bids now due for the 40 acre stretch of land due by 30 April.

As well as the SkyVue site, the package includes apartments and a series of vacant plots, and is offered as a whole or in pieces.