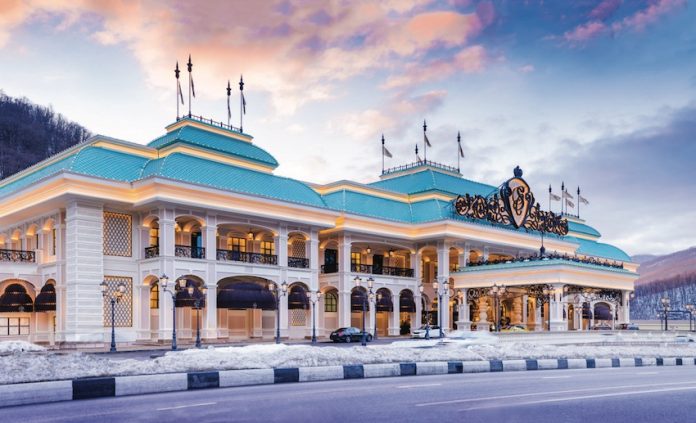 With all eyes on Brazil and Japan it would be easy to overlook a third market opening: Russia. While the government has maintained an anti-gambling stance since its 2009 decision to limit gambling to five remote gaming zones, the decision to move a zone to Sochi reflects a tacit change in political position.

Sochi Casino & Resort ushered in a new era when it opened its doors last December, reflecting a significant change in tack by the Russian government which has previously maintained a rigidly anti-gambling stance.

A veteran of the Russian casino industry, Paul Edwards, deputy general manager at Sochi Casino and Resort, has witnessed first-hand the changes the country’s landbased industry has undergone.

“Prior to the introduction of the legislation restricting unregulated gambling in 2009 there was a big campaign to crack down on casinos,” he explains.

“At that time casinos were on every corner, there was very little regulation and because there were so many unregulated slot machine parlours around the place the public opinion was very negative.

“Our main task now is to change this perception so that casinos are seen as another entertainment option, so people can look on visiting an establishment as a legitimate way to spend a night out.”

Edwards notes that a component in changing the public perception of casinos is moving the nation’s players away from a Russian Roulette mindset, encouraging responsible gambling behaviours and promoting gaming as a form of entertainment.

“It’s going to be a challenge, the Russian attitude towards gambling tends to be all or nothing, they’ve got this real idea about ‘it’s either you or me and this is the way it’s going to be and we’re going to stay to the end’.”

We’re trying to change that so that people basically see it as a night out where you can have a good time and watch a show, a similar model to that which we see in the West,” says Edwards.

The venue’s primary focus is on the Russian market and prior to opening it undertook a public relations campaign which created significant anticipation in the country.

“With the soft opening in December, we didn’t tell anyone it was happening, but right from day one we had almost 500 people through the door, even though we hadn’t publicised it.

“I think we opened at quite a fortunate time because it was right in the middle of the skiing season, so we had something of a captive audience.”

Building on this, Sochi Casino and Resort has undertaken television and radio promotions, mainly focused on the Moscow-St Petersburg market, which Edwards identifies as the casino’s two biggest feeder markets, in addition to advertising in the airport and train stations.

“Advertising is very strictly regulated in Russia, so we advertise the resort rather than the casino – we don’t actually use the word casino in our promotions – instead emphasising the range of entertainment options we offer.”

“We’ve focused on offering first-class, top of the range entertainment, particularly as we can’t advertise the gaming itself.

“Our food and beverage offering is also very fine, Ilya Zakharov is our chef and while he’s not that well know internationally, his dishes are just incredible.”

For January’s official opening, the venue staged a concert, featuring popular Russian artists including Leningrad and Valery Meladze with the event broadcast live on national television, yet another sign of the authorities’ willingness to support the resurgent industry.

“The biggest competition for anyone looking towards the Turkish market is Cyprus, it’s so close, and because the competition is so fierce they’re offering a lot of rebates and incentives for players to play there.

“Despite this, we’re definitely interested in the Turkish market, we’ve got direct flights from Istanbul to Sochi, which is a fantastic connection, since a couple of hours and you’re there, and certainly that’s one of the most interesting overseas markets for us.

“Even last year, Sochi had a very good programme going with the Iranians and we’re getting involved with some of the Asian tourism shows and events as well.

“In terms of the over- March 2017 casinoreview | 3 seas market, the biggest challenge for us now is to try and increase the number of flights internationally to Sochi.”

Even with limited international connecting flights, the region is still attracting a significant number of overseas visitors.

Last year on average 27,000 people a day were flying through Sochi airport, compared to 2014, which saw 23,000 people during the Olympics.

“So we’re actually getting more volume now in Summer than when the Olympics were on, but if we haven’t got these international flights then obviously it’s more difficult for people to come here,” says Edwards.

“It’s a big factor, if you’re trying to plan a trip, nobody wants to take a 12 hour flight when it’s literally just three or four hours away from where you’re living.” Edwards praises the cooperation the venue has seen from regional authorities:

“The local government have been absolutely fantastic, there’s been a concerted effort on their part, along with the national government to regenerate the area and they understand that if the casino is successful it will contribute to that process.

“The biggest challenge that we had was to try and lift the spend per head, in the middle of the season everything’s very expensive in the skiing region, and on the shoulder season it just drops off.

“So we get a lot of budget tourists coming through in the shoulder season, and the whole idea with the casino is to lift up that average spend per head, and already we’ve seen that repeat visitors have increased, people have been coming down from Moscow, and I think that trend will only continue.”

In terms of staffing, Sochi Casino and Resort has seen a number of employees cross over from Tigre De Cristal in the Primorye Integrated Entertainment Zone near Vladivostok, in addition to a large influx of people who worked in the industry prior to 2009 who wanted to return to the business.

“We’re also hoping to encourage a new generation of talented casino employees and establish an enduring standard of best practice in the Russian industry,” says Edwards.

“To that end we’ve also tried to build up a pool of staff we’ve trained ourselves and currently that figure stands at around 60 percent of our workforce.

“Taking into account that we’re an international facing venue we count Chinese and Turkish speakers among our staff, and obviously English is a priority as well.”

Edwards reports that at present, the ratio of players on table games to slots is about 60/40, however he expects to see growth on the slots side as players get to know the new games.

“It’s not really a re-education, but it’s presenting things in a different way and customers are reacting well to it well.” “Gaming in Russia has traditionally tended to be more male orientated however, having said that, we’re now beginning to see more couples coming in.

“We’re seeing a lot of millennials, people who’ve never been to a casino before, and we’re getting a much younger crowd coming through,” he concludes.