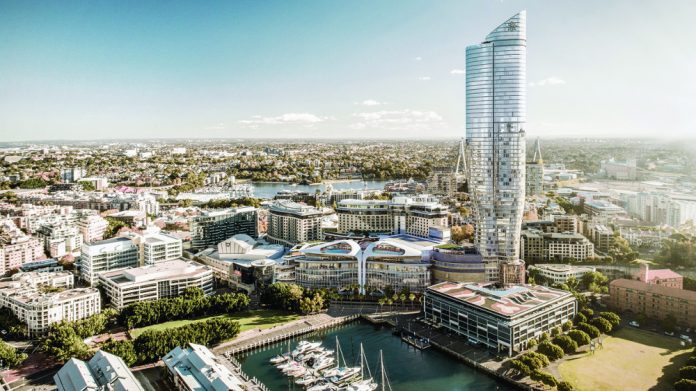 State premier Gladys Berejiklian has ordered a review of Pyrmont’s planning rules after the New South Wales Planning Department found that Star Entertainment’s plans for a $347m hotel and apartment tower adjacent to its flagship property in Sydney were “not in the public interest”, while the development has also found an advocate in state treasurer Dominic Perrottet.

Star Entertainment Group’s plans for a hotel and casino development in Sydney hit a significant setback after state planning officials rejected the company’s proposal, but there may still be hope for the project following the lastminute intervention of the New South Wales premier.

In late July, the New South Wales Planning Department issued a report stating that ASX-listed Star Entertainment’s plan to build a AUD500m ($347m) hotel and apartment tower adjacent to its flagship property in the city’s Pyrmont district was “not in the public interest”.

The company’s proposal includes 220 Ritz-Carlton hotel rooms along with 200 high-end residences within a 230m tower, which would adjoin The Star. The development would also see the addition of new amenities to the existing casino complex including a rooftop pool area and up to 15 additional food and beverage outlets.

The 66-storey, Ritz Carlton- branded tower would mark the return of the company – a subsidiary of Marriott International – to the city, following the closure of Sydney’s two Ritz-Carlton hotels a decade ago.

However, given that the local environmental plan for Pyrmont sets a maximum height of 28m for structures in the district, NSW Planning Department concluded the proposed development was inconsistent with surrounding buildings in height and form and “would not contribute positively to the skyline”.

“While numerous taller buildings are situated within Darling Harbour and Barangaroo, these form part of cohesive clusters of high-density buildings, associated with strategically identified precincts,” planning authorities said. “The same context does not apply to the Star site.

“The plan would introduce a new tower form that is inconsistent with its immediate context and would result in unacceptable visual impacts due to its scale, isolation and visual dominance of the existing Pyrmont character and fails to promote good design and amenity of the built environment.”

Responding to the report, Star Entertainment MD and CEO Matt Bekier argued that the Australian market is facing a shortfall in luxury hotel accommodation, emphasising that the country “needs more five star hotels”.

“We’re the number one destination in terms of desirability for the ethno-Chinese, number one in terms of intention of going, but somehow we ended up at number 14 on the rankings of where the Chinese actually go,” he stated, speaking at an Asia Society Australia conference in Sydney.

A Tourism Research Australia report in March found China was Australia’s largest inbound tourism source market in terms of volume and spending, with Chinese visitor numbers in Australia set to reach 3.9 million in 2026 with a total spend of AUD26.2bn.

“It’s not an issue of airports, because there’s lot of capacity coming on …there’s It’s a big opportunity for us that is just drifting past,” Bekier continued, emphasising that Ritz Carlton was a top-three brand in Asia among affluent customers and adding that Star Entertainment has not “given up” on the project.

Margy Osmond, CEO of the Tourism and Transport Forum, took a similar position and said the decision sent a “most unfortunate” message to investors in the hotel sector.

“At a time when we need more and more A-grade accommodation and some other styles that we’re not making these and we’re getting a reputation for being an incredibly difficult place to develop anything,” she said.

Despite the planning department’s decision, Star Entertainment’s project has some high-profile political advocates.

In late August, state premier Gladys Berejiklian seemingly intervened in favour the development and has ordered the Greater Sydney Commission to complete a review by the end of September to ensure Pyrmont’s planning rules are “consistent with the government’s vision for its future”.

“I am sending a strong message that Pyrmont is open for business and ready to be taken to the next level,” Berejiklian said. “While individual applications will continue to be determined on their merits, this review sends a clear signal that our government believes the Pyrmont area has a bright and exciting future as a key part of the NSW visitor economy.”

At the time of writing, it unclear what the premier’s intervention means for the Independent Planning Commission process, which was due to convene to make a decision on the proposed development at the end of the month.

Despite the report’s findings, NSW treasurer Dominic Perrottet had earlier affirmed that he wants to see the hotel tower go ahead and was concerned by a lack of discussion to “iron out” the issues between The Star and the planning department.

“We can’t also have a ‘nimby’ mentality that ensures that hotels like this one which will make a real difference to tourism in our city and state and our country don’t go ahead,” he stated, speaking on 26 July.

“You would think common sense would prevail and that you would get a development that works and at the same time delivers the world-class hotel that backs-in tourism opportunities for our city and state,” Perrottet concluded.