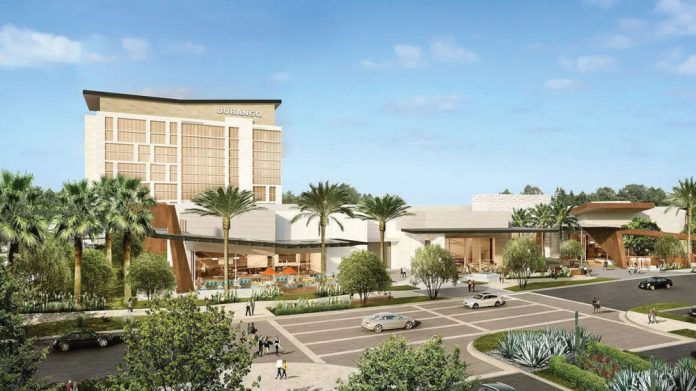 The resort will be developed in two phases, while Station Casinos hopes to break ground on the project early next year.

The Commission gave the green light to the company’s proposal to build a 211- room hotel with an 83,178 sq ft casino on South Durango Drive.

The operator says plans to break ground on the new project – dubbed Durango, a Station Casinos Resort – early next year.

“Once again Stations, as a true locals casino, is coming to the rescue in the Southwest, I’d say, by providing them a place where they can dine, where they can go hang out,” Bob Finch, COO for Station parent company Red Rock Resorts.

The property will be developed in two phases. The first phase will include a single 216 ft-tall hotel tower; four restaurants and beverage stops; a “state-of-the-art” race and sportsbook; and 20,000 sq ft of meeting and convention space. The property will feature a food hall concept with local fast-casual restaurants.

The next phase comprises a second 216 ft-tall hotel tower with an additional 241 hotel rooms. It will increase the casino floor size to 92,911 sq ft and see the addition of further banquet space, an entertainment/theatre area, a new parking structure and more lobby space. “This is a statement to the local market that, you know what? We’re rebounding, and it’s going to be good. Las Vegas is going to continue to grow,” Finch said.

On 31 August, the Spring Valley Town Advisory Board voted in favour of Station Casinos’ plan to build the casino resort on a 71-acre plot of land which the company has owned for more than two decades.

“Station Casinos appreciates the Spring Valley Town Advisory Board and its residents for their input on and support of the Durango project,” said a spokesperson for the company following the approval. “Our new development will be a great addition and a great community partner, employing thousands of construction and full-time team members and creating tens of millions of dollars in new state and local taxes. The Company looks forward to releasing more information on the project in the weeks ahead.”

Some Spring Valley community members raised concerns at the meeting surrounding an increase in traffic. While the board approved the project plans, it also recommended developers look at any improvements.

“We will be working through any traffic concerns with staff,” Miltenberger noted.