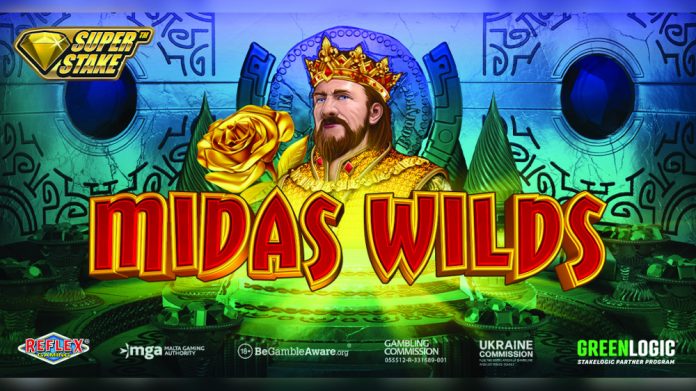 Reflex Gaming’s debut slot game for the Greenlogic partner program, Sea God, launched in the Summer, proved to be a popular hit with gamers worldwide. This time, Reflex Gaming and Stakelogic team up again, to present you with, Midas Wilds.

The Greek mythology inspiration is apparent once again; Midas Wilds is based on the legend of King Midas of Phrygia, renowned for his greed. The setting is King Midas’ palace, with the treasury of shrine deployed as the game’s backdrop. The king was granted a wish by the goddess, Dionysus, and he foolishly chose for everything he touched to turn to gold.

The game is available in four RTP versions. The volatility ranges from medium to high, once the Super Stake feature is activated, guaranteed to get pulses racing!

When the special King Midas symbol lands in view, it triggers one of three Wild boost Bonuses:

The Free Spins bonus is triggered by landing 3 Scatter symbols in view on Reels 1, 3 and 5, awarding players with 8 Free Spins. In Free Spins, the Midas symbol can award players with Wild Boost Bonuses, but with the addition that after each bonus, Wild symbols lock in place, and a Wild Re-spin is awarded.

Each time the Midas Symbol appears, the number of Wild Respins increases (maximum of 3 respins). If players lock in high-paying patterns of Wild symbols during these Respins, they will be awarded with mega prizes.

Mat Ingram, CPO at Reflex Gaming, said: “This game is our take on the popular King Midas theme. Combine this proven formula with the innovative Super Stake game mechanic, and you have a match made in heaven. I’m a big fan of Free Spins features that become progressively better as they play out, players will see that the Midas Wilds feature can give them amazing win potential.”

Salvatore Campione, Head of Greenlogic at Stakelogic added: “From the initial spin to the last, this highly entertaining slot builds anticipation with every spin.

With the Free Spins, players are taken on a hair-raising adventure. As the number of Wild Respins ramps up, and the multipliers kick in, the winning potential gets bigger and bigger.”