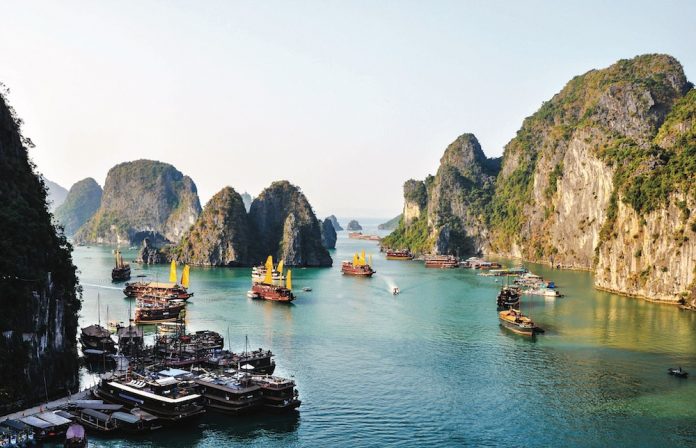 Quang Ninh’s local government has clarified that Sun Group are the sole developer with permission to build a new luxury resortentertainment complex and casino in Van Don Economic Zone. With the green light flashing, the company is now proceeding with infrastructure improvements which look set to make the region a hub for Chinese tourism.

The regional government of Quang Ninh province has reaffirmed that Sun Group is the only operator approved to develop a casino in Vietnam’s Van Don Economic Zone.

In late March, news broke that Quang Ninh has given another developer, FLC Group Joint Stock Co, the go ahead to build its own $2bn casino resort in Van Don.

Since the announcement of the FLC development last month there has been speculation amongst industry commentators that it could be a phantom project.

Critics have pointed to the isolation of the proposed site on the islands of Ngoc Vung and Van Canh, lack of transport infrastructure and apparent u-turn by the region’s government on licensing.

In March, Nguyen Duc Lonng, chairman of Quang Ninh People’s Committee stated that the regional government was “glad to have FLC invest in Ngoc Vung”.

However, the following month, the People’s Committee sent a document in response to a request for clarification from Sun Group, confirming that the company is the only developer chosen by the province to develop and operate the casino in Van Don Economic Zone.

The document, signed by Nguyen Van Thanh, deputy chairman of the committee on 17 April, confirmed that “Sun Group is the province’s strategic developer, and was chosen by the province to report to the prime minister as the only developer of the luxury resort-entertainment complex with a casino, according to the master plan approved by the prime minister, and allowed to pilot allowing Vietnamese citizens to play in the casino.”

“In Quang Ninh there is only one viable project that’s happening and that’s Sun Group’s casino in Van Don,” affirms Eric Coskun, senior associate at IGamiX Management and Consulting, which worked with Sun Group on the project.

“The government has clearly stated that Vin- Group’s property in Phu Quoc – expected to open in Q4 of 2017 or the beginning of 2018 – and Sun Group’s venue in Van Don will be the two properties that will get local gaming.

“Possibly after the three-year trial is complete, other venues will be allowed to offer gaming to Vietnamese nationals, however the government has stated that there is also a good possibility that they may extend the trial period for a further three years after is initial period is complete.”

In January, the government drafted Decree 03/2017/ND-CP, regulating casino business activities for Vietnamese citizens, with the legislation coming into effect on 15 March 2017.

During the trial period, eligible Vietnamese customers must be at least 21 years old, have a monthly regular income of minimum VND10m ($454.5), and be legally competent.

“We think that the local gaming concept in Vietnam would appeal to primarily what the Boston Consulting Group has called the middle and affluent class (MAC), which are people who have a salary of $1400 and higher with 12 million people following into this category in 2012,” Coskun states. “This concept would be totally unattractive to the low end of the market, purely because of the minimum salary requirements and the entry fee of a million dong each time they come in for a 24 hour period.”

As part of its project, which is estimated to open Q1 2019, Sun Group has invested heavily in supporting infrastructure.

The company is building a new international airport at Van Don, just a 30 minute drive from Halong Bay the terminal seems set to become the new gateway to the region, with analysts predicting an estimated 2.5 million passengers per annum in its first phase alone.

Sun Group are also building an expressway connecting Van Don to Mong Cai on the Chinese border, along with a six lane expressway and light rail connecting the airport to the property.