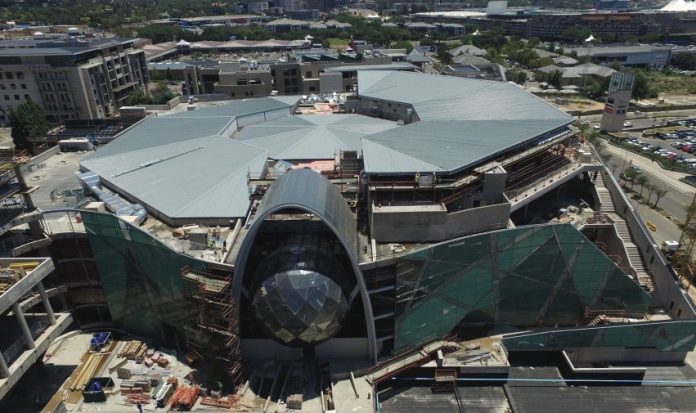 Sun International builds towards its Time Square opening which the company is claiming will be its flagship operation.

As Sun International prepares to open the doors to its latest iteration, management will be hoping it fares better than other ventures in recent years.

Having been hampered by poor gaming food and beverage sales, the firm is resting on the prospects for Time Square, a four billion rand project and the largest South Africa has seen since Sun built the Grand West casino Cape Town in 2000.

Despite being more nimble financially, Time Square is being lauded by the group as its flagship operation – a break from the past they say – with extra air and light and special no-smoking partitions, Salon Prive casino is expected to bring in 40 percent of the venue’s revenues.

The casino will employ 250 staff, with 60 tables and circa 2,000 slot machines – more than 200 chefs are alleged to have designed menus for the resort’s 16 restaurants.

Getting the new project ready for guests within a two year time scale has been something of an obelisk for the company’s now outgoing CEO, Graeme Stephens.

“Nelson Mandela has been quoted as saying that ‘it always seems impossible until it’s done’, and there were times when this project seemed impossible,” Stephens told the media while walking around the almost finished construction.

Securing permission from the Gauteng Gambling Board for Sun to move its licence from Morula Casino in Mabopane to Menlyn in Tshwane was particularly ailing, he explains.

The protracted 24- month saga involved a failed attempt by Sun International to acquire competitor Peermont. Sun still had to pay Peermont a R675m “break fee,” but the licence was eventually granted.

“I’ve learnt that to surmount obstacles one needs to face them down calmly – some of them I don’t even need to get into low range for,” he said referring to his associated love of land rovers.

Stephen joined Sun in 2011 and will join Skycity Entertainment Group in New Zealand this April.