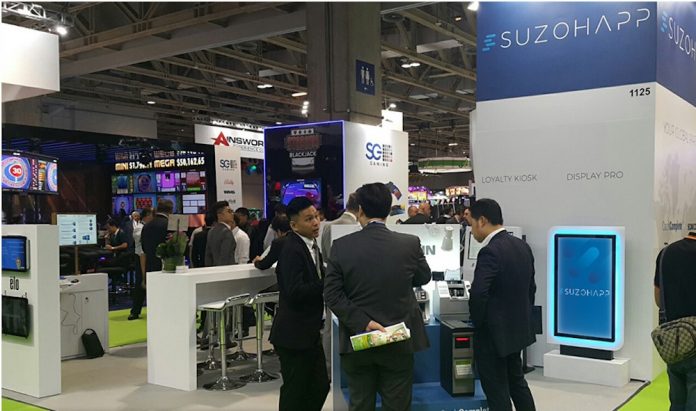 At this year’s G2E Asia, which took place May 16-18 in Macau, SUZOHAPP has confirmed it received a positive response on its stand with the focus on its most effective products to simplify the players’ cash management process and to save money for the operators. The company stated that one of its most popular solutions for visitors at the show was the Chip Dispensing Machine (CDM), a secure and automatic chip vending machine which stores a high number of chips so that players can purchase chips for cash directly.

“The CDM is about to go live in Australia in June,” said an enthusiastic Geoff McDowell, SUZOHAPP APA Managing Director. “The interest has been significant here at the G2E Asia. As the cost of employees goes up, operators are looking for ways to reduce overhead.”

In addition, SUZOHAPP displayed its Cash Redemption Terminal (CRT), which will be released to the market very soon and has been developed for bill breaking and cashing tickets from the gaming floor. The company added that players are able to use the CRT to change larger value banknotes into smaller ones and to cash out their ticket winnings.

SUZOHAPP claims its cash handling solutions were of particular interest to visitors, specifically the CashComplete™ SDS-25 and SDS-30 deposit solutions and a selection of SCAN COIN desktop products. The company also reported that its RM5 electronic coin validator, which has sold over one million units sold worldwide, was in high demand at the show, too.

SUZOHAPP represents leading component suppliers in the industry on a global basis and so a wide range of ELO touchscreens and TransAct printers were displayed at the G2E Asia.

“This was an exceptional show. I’d like to thank everyone who visited us in Macau. Asia is a big growth market and, in the next five years, we will be focused especially on Macau, the Philippines and Japan. As we have been successfully serving the global market for decades, we are confident we will achieve great results in these markets, as well,” McDowell concluded.