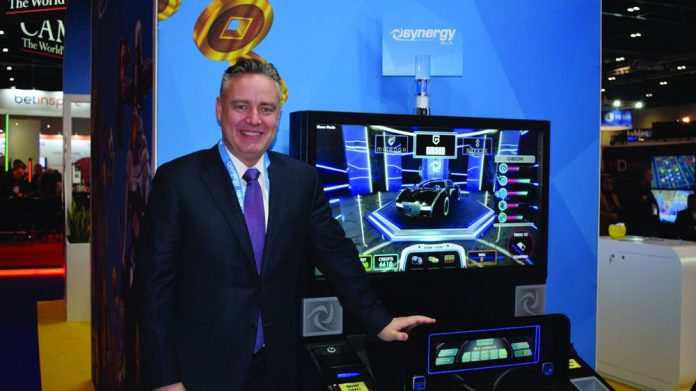 Arcade-style casino games and platforms developer Synergy Blue celebrated its progress over the past year at this year’s ICE London, with the company showcasing numerous new developments.

“One of the main highlights for this year’s ICE is our realistic interactive driving game Joyride Jackpot,” said Georg Washington, CEO of Synergy Blue. “The graphics are phenomenal and at the same time it’s very entertaining to play. In that sense, we’re really aiming to exceed customers expectations in terms of what they’d expect from a video game, while combining this with the excitement and fun of gambling.”

Joyride Jackpot includes aspects of a traditional arcade driving game, allowing players to select their car model and track, while it also features multiplayer enabling them to compete against their friends.

“If you do well in the game, coming in first, second or third place, you receive a much bigger multiplier at the end, so that’s the skill-influenced side of it coming into play,” Washington explained. “You get what you’ve accumulated from your bonusing times the multiplier. If you come first on the medium or harder levels you get x25. Of course everybody wants to get the top time, that’s the competitive aspect.

“From a European perspective, Europeans are really into their sim racing, and racing in general, so we thought it would be a great title to lead with for ICE London.”

Alongside this, the company also presented a cowboy/ alien themed arcade shooter, Lucked and Loaded, at the show. With both skill-influenced and chance-based versions of its games available, as well as Class II options for Native American markets in the US, Washington affirms that “Synergy Blue has all bases covered”.

Discussing consumer trends, the executive notes that while many manufacturers and developers have invested heavily in pursuing the coveted millennial market, Synergy Blue is also targeting another, frequently overlooked, demographic.

“The surveys that we’ve been doing while our games have been undergoing trials indicate that we’ve really hit the mark with Generation X which is great to see,” Washington reported. “We were careful to avoid orientating our products solely towards millennials, as has been a trend in some areas of the industry. As a demographic Generation X is quite untapped, but it has the money and the time, so it seems like a natural fit with what we’re offering.”

2019 was a big year for Synergy Blue with the company receiving a Nevada gaming licence and launching its games in trial placements with Station Casino and Caesars Entertainment. The company’s games are currently going through Nevada trial phases at Red Rock Casino, Palms Casino Resort, and The LINQ.

The firm is in the process of expanding its reach to new regions through distribution agreements that cover Europe, Southeast Asia, North America and the Caribbean.

“We’ve been expanding our footprint in terms of distribution so we can get our products out there while ensuring we’re able to provide full support to our customers. We have a new partnership with Jade Entertainment in the Philippines, we also just signed a distribution agreement for Canada with Bet Rite, and in the US we have another agreement covering Oklahoma with Dynamic Gaming Solutions,” Washington stated.