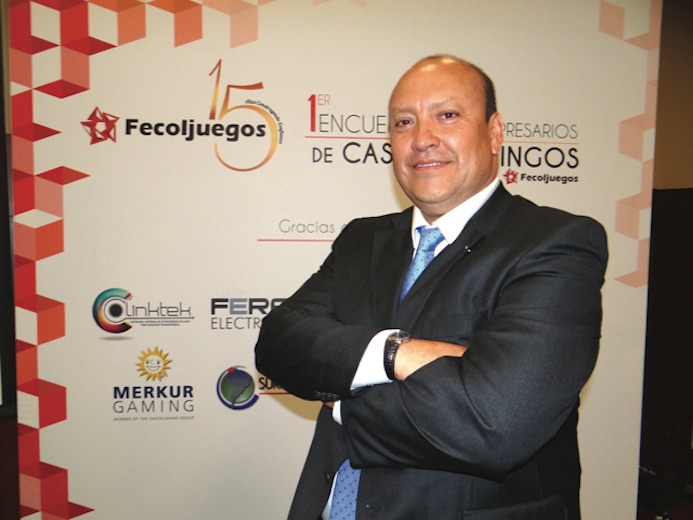 Dedicated to defending the interests of Colombia’s gaming operators, trade association Fecoljuegos has played an active role in lobbying both the regulator, Coljuegos and the National Congress. The association’s president, Dr. Evert Montero Cardenas, gives an overview of the Colombian gaming landscape in 2017.

A significant issue for Colombia’s operators has been Coljuegos’ requirement that all gaming machines be connected to a government server in real-time. How has the implementation of this affected the industry?

2016, it was not an easy year for the gaming sector, the industry has seen major changes which have required adjustments on the operational side, one of the most significant of which has been the real-time online interconnection This was a very tough issue for us, because our machine fleet was not ready, from a technical standpoint, for this development. It was a complicated, difficult and costly process, due to financial fluctuations and the rise of the dollar, and because in many cases operators were forced to replace their older machines altogether in favour of more modern ones. At the same time we recognise that it has been an important step forward, especially as it will ensure transparency, further differentiating the regulated industry, and secure the sector against money laundering. This connection also enables an operator to see any transaction made on any machine in real-time, and our members understand that it will be a significant tool to help manage their casinos since this data can be accessed from a computer, tablet or smartphone at any time. In this sense, while we approve of the concept behind the connection, the implementation has been difficult and we have called on the government to reimburse operators so that they could have their machines re-manufactured which would have been significantly cheaper than buying completely new machines.

What are the major challenges facing Colombia’s casino industry?

Another significant issue facing licensed operators in that of illegal gambling, which continues to have an economic impact on our sector. At present there is not space for Colombia’s market to continue to grow due to the illegal industry. There are approximately 2,500 casinos and gaming parlours in the country, but it’s estimated that there are a similar number of illegal establishments. I consider it very difficult for the market to continue to expand, especially in certain niches such as gaming parlours due to this issue, although there is still some room for growth in terms of casinos which form part of hotels or resorts. More needs to be done to combat illegal gaming and while I think that Coljuegos’ president, Juan B Perez Hidalgo has taken this in hand, it is a slow process which requires greater cooperation between the state and municipal governments, and the national police and the judiciary. An overlooked aspect of combating illegal gambling is by making the regulated gaming sector attractive not just from the government’s point of view but also from that of the licensed operator, and more could be done on this front. In several instances, we have observed that the excessive financial burden placed on licensed operators has pushed casinos to go to down the illegal route to remain in business, a practice that, naturally, we do not condone.

Based on this, what could the government do to ease the strain on licensed operators?

For the industry to stay afloat and continue to be profitable, studies suggest that operating costs should be around 60 percent, presently we’re paying between 80 to 85 percent, so the margin to make a profitis very small. Last year we managed to get the government to concede that electronic slot machines are capital goods – the tool with which businesses generate their income – and that therefore the VAT paid on them can be discounted. This is a very important achievement as it brings financial relief to operators. In all other industries, VAT paid on the purchase of capital goods can be discounted, ours was the one in which this was not the case. At present we feel that the state is overly focused on tax revenue, and in this way it puts the viability of the gaming industry at risk. By looking for immediate results in terms of the revenues generated, they jeopardise sustainability of the sector in the long term and impose a tax burden on the operator that can break a business.