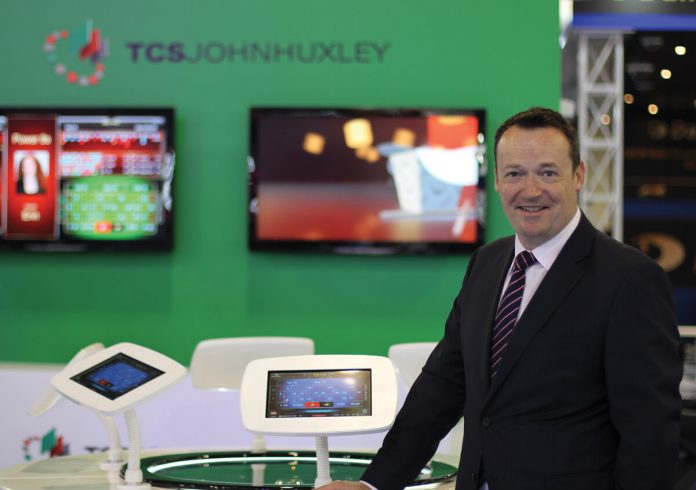 [dropcap]F[/dropcap]or over four decades, TCS John Huxley has been crafting some of the most random and secure wheels available on the market. Known for their reliability, quality and technology integration, the company’s wheel range has now expanded to include its newest addition, the Saturn Glo roulette wheel.

Making its debut at this year’s G2E Asia, Saturn Glo boasts the same cutting-edge features as its predecessor, the Saturn, but with the addition of LED technology that provides inrim lighting colour changes according to what’s happening in the game.

Designed to literally ‘light up’ the game, Saturn Glo can be programmed to indicate game status and also features an exciting array of attract modes in a variety of colours.

Although colour options are down to operator preference, the Saturn Glo wheel showcased at G2E Asia featured an eye-catching light sequence to indicate ‘Finish Betting’ illuminated in blue, ‘No More Bets’ in red and once the winning number was established, Saturn Glo’s lights turned green. Then after a predetermined time, the green lights pulsate to indicate the start of a new betting sequence.

In addition to Saturn Glo, TCS John Huxley’s Gaming Floor Live (GFL) Media Module made its mark at G2E Asia this year. The module enables every display on the casino floor to communicate, collecting real-time results from the game and pushing out media and event content for display.

By linking together previously stand-alone casino displays, operators can now alter, schedule, customise and configure displays from one central point through a browser-based user interface. This saves time and valuable resource, allowing for quick and efficient display changes to be made and eliminating the need for physical configuration of each individual screen.

The first installation of GFL Media is about to commence in Australia for Casino Canberra, which is owned and operated by Aquis Entertainment. The casino will be linking together over 30 tables that feature Baccarat and Roulette, with the ability to also feature Blackjack and Money Wheel games.

Also on display on the TCS John Huxley booth in Macau this year was the company’s popular Blaze LED surface technology. As the industry’s only table technology to project custom video animations through the layout, Blaze has proven an exciting addition to any gaming floor, and the solution has been welcomed by many of Asia’s leading casinos, including the Venetian Macau, Studio City, Galaxy and Marina Bay Sands.

“G2E Asia provides a great opportunity for us to showcase our latest products as well to reinforce our core range,” said Jim Preston, director of Asia sales for TCS John Huxley. “We had some very exciting products that our customers were able to experience first-hand. Visitors to the show were particularly interested in our Blaze LED surface technology products as well as the introduction of GFL Media. As a result, both products will be installed in the region in the coming months.”