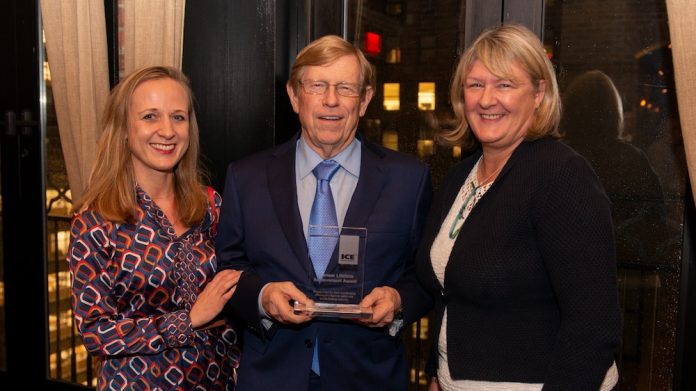 Mr Olson, who received his award at a special reception held in New York and hosted by Clarion Gaming, was recognised for his success in leading the oral argument in front of the United States Supreme Court in the historic Murphy vs. National Collegiate Athletic Association, which ultimately led to the repeal of PASPA (Professional Amateur Sports Protection Act).

Ewa Bakun, Clarion’s Director of Industry Insight and Engagement who presented the award to Ted Olson, said: “Although there are a number of people who contributed to that success, it’s fair to say that without Mr Olson’s brilliantly delivered Supreme Court argument, and all the work that led up to it, we wouldn’t be here this week at ICE Sports Betting USA discussing the future of legal sports betting.  We would like to honour Mr Olson with an award for basically being the father of legal US sports betting and clearing the path to the creation of this market.  It was a long journey and the odds didn’t seem great for quite a few years, but you were the person who made it happen.”

The iPioneer Lifetime Achievement Awards, which have been developed as part of the ICE North America campaign, will recognize outstanding individuals within the sports betting and interactive industry.  The selection of recipients will be conducted in cooperation with Ampersand, Clarion’s 1,000-strong think tank.

ICE North America (May 13-15 in Boston, MA) will bring together Clarion’s US assets, GiGse and ICE Sports Betting USA, with the addition of iLottery, esports and affiliate marketing streams, to create a single large-scale event.

To find out more about ICE North America, go to www.icenorthamerica.com.