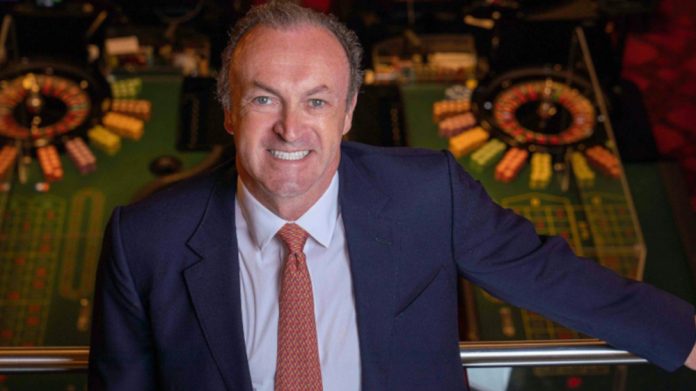 ICE London returns to the world stage in less than three months time to open the 2022 calendar of global gaming events. Delivering a glimpse of what the new normal will be, 550 exhibitors will be heading to the UK for the first international gathering of the industry since Omicron. Looking forward to the show is industry veteran Simon Thomas who sees ICE 2022 as a pivotal event.

Simon Thomas, owner of the world famous London Hippodrome Casino, has backed the return of ICE London describing the show’s April dates as being an important opportunity for the recovery and growth of the international land-based gaming sector. The former Bacta President, who has a long-standing association with ICE London and its predecessor, ATEI, joins European Casino Association Chairman Per Jaldung, ECA Secretary General Hermann Pamminger and The Gambling Business Group in endorsing April’s return of ICE London after what will be a 26-month absence. He confirmed: “I’ve missed the opportunity to meet industry figures and colleagues in person when the real conversations happen.” Referencing the spread of the Omicron variant which led to the identification of new dates later in the Spring he confirmed: “London has led the charge against Covid and restrictions have been lowered. It’s vital we now focus on returning to rebuilding the industry and ICE London is a great chance to do that. I look forward to seeing everyone there.”

Stuart Hunter, Managing Director, Clarion Gaming and the person responsible for delivering the return of ICE London, said: “I’m delighted that the market we serve is eager and committed to get the show back on the road. The senior team has worked tirelessly with our colleagues at ExCeL London to find alternative dates for what is one of the most successful and biggest in-person business events held in the UK which in conjunction with the co-located iGB Affilate London comprises more than 700 gaming industry exhibitors. Securing new dates has been a mammoth task and has involved migrating six other events to enable ICE to have the entirety of ExCeL which is the space required to operate at full capacity.”

“We acknowledge that the April dates that we have secured do not suit everyone and that we will as a consequence miss a small proportion of our most loyal customers. This is highly regrettable and we continue to do our best to work through the challenges and provide support with preparations and planning for what is the world’s biggest and most influential gaming industry gathering.”

One of those loyal customers missing from the 2022 showfloor will be Merkur Gaming Group which announced that it “has reluctantly taken the decision to withdraw from its planned participation”. In a statement issued this week, Merkur explained the reasons behind its decision, noting the proximity to the Easter holiday period and continued concerns over “the Omicron variant is currently rampant throughout the United Kingdom and is still a major health risk issue.” To that end, Merkur added: “We have a clear duty of care for our employees and also for our business partners, customers… and that must be a major priority.”

Equally concerning for the gaming giant is “the still to be seen additional logistical difficulties that stem from the UK’s Brexit withdrawal.”

The door was left open for future shows, however, with Merkur stating: “We regard Clarion Events and ICE itself as major factors in Merkur’s success in recent years. We hope to be able to re-engage with them at the earliest possible opportunity but that has to be at the right time, in the right place and in the right conditions. We look forward to that positive collaboration.”

But for the 550 plus exhibitors heading to London in April, the emphasis for Clarion is getting the ‘greatest show on earth’ geared up for the new normal, a task Stuart Hunter is fully focused on. “We have been really encouraged by the level of industry support that we are receiving expressed both publically and in private emails,” he explained. “We have also commissioned independent research of the ICE database of stakeholders and the initial responses regarding the intentions to attend April’s edition of ICE London are overwhelmingly positive and augur well for our hundreds of exhibitors who will be on the show floor. I am sure the market understands that we are doing our level best to deliver another strong edition of ICE London and celebrate the return of the industry in the best possible way.”