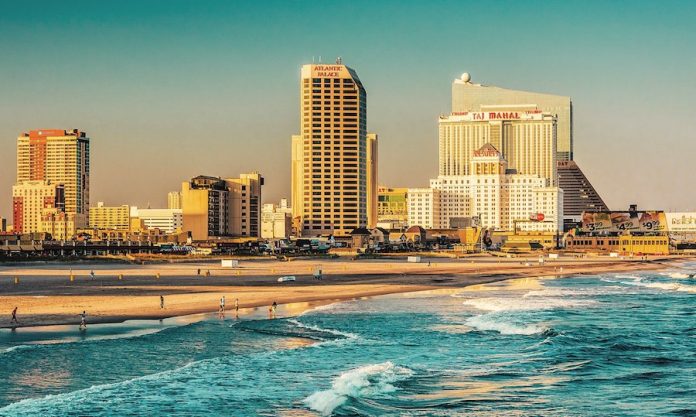 Gaming in New Jersey is on the rise following a period of poor performances, with investment into Atlantic City properties and a boost in revenues from casinoregulated online gaming reinvigorating the market, reports Tom Rush.

Atlantic City, and all its mansions of glory, has weathered turbulence becoming of its position of coastal exposure, but it now appears the clouds of recession are parting and beginning to illuminate the once-maligned coastline with rays of possibility.

The east coast’s premier gaming destination has experienced a promising first quarter and a positive start to t h e summer, footfall is up, revenues are up, and money seems to be coming back to the Atlantic City’s hallowed shores. In May alone the New Jersey Division of Gaming Enforcement show the state’s seven casino operators reporting brick-and-mortar gaming revenue of $208.3m, 2.5 percent higher than the same month last year and a significant rebound from April’s $191m.

Additionally, $21.1m was generated by the state’s licensed online gambling operators meaning that overall May’s total gaming revenue was up 4.3 percent to $229.4m.

Furthermore, if one is to only compare the seven casinos that were open in both this May and last – thereby excluding the impact of the now-closed Trump Taj Mahal – and the year-on-year brick-and-mortar gain rises to 10.7 percent. Previous perilous marketing conditions may have led to the shuttering of a number of properties through the city, but those that remained have been rewarded with an ever-rosy looking market place.

“The pendulum is starting to swing back. For many years many of us thought that there was excess capacity in Atlantic City and there needed to be the contraction that we have seen over the last couple of years, seeing four or five properties closing. As this demand has been absorbed by the existing operators the pendulum has naturally begun to swing back the other way,” said Jeremy P Kleiman, a gaming attorney and member at Saiber LLC.

Due to this, operators outside of New Jersey are beginning to sense the opportunities present within it.

“Hard Rock opening next year will certainly be great for the market, as well as the potential joint venture of some kind between Caesars and MGM, which may not even be a gaming property, are positive signs that attitudes are changing regarding what the market can really do,” Kleiman added.

Further to this, Fred Gushin, MD Spectrum Gaming Group added the property investments are one of the most pertinent examples of a rush of capital entering the marketplace owing to the continued appeal of land based gaming institutions, and their diverse offerings.

He added: “These types of ongoing investments that have been lacking over the last decade that are being announced are a reflection of the industry’s confidence in Atlantic City.”

The scope for progress within the city is not without issue however, whilst new premises may represent affirmation of potential prosperity, there is a risk that older properties may not be able to compete on a level playing field due to the spatial constraints of their historic builds.

Kleiman noted that any such threat can be allayed through a progressive approach to casino floor layout, and how best to engage customer traffic. “What they can do to try to match the energy or some of the newer properties such as the Borgata or Harrah’s for example, is to start to reconceptualise the casino floor, because the demographic is changing and you need to attract the younger customer,” he added. “The challenge is how you see the space in a casino and get it to mirror the interactive environment which younger people get their entertainment through.”

The wider American trend of resort casinos is something that Atlantic City will likely have to get fully on board with if positive performances are to be maintained in the coming periods. Whilst weekend visits to the gaming venues in the city are currently enough to make them viable ventures, redevelopment of both properties and the wire area is needed if a true holiday destination is to be cultivated.

Lia Nower PhD, professor director, at Rutgers University’s Centre for Gambling Studies commented on this need to look further than the immediate impact of property investment in the city.

“I see it as a positive sign, for example the Borgata has managed to keep making money despite the downturn. But, like Revel, there have been places that have not done well despite the investment of a lot of money. Personally, I think that if they are going to be successful something has to be redeveloped with the surrounding area to attract more than just people who want to go to gamble.”

She added that such initiative lies both with casinoproperties and the city government: “There really needs to be a long term plan of development along the shore area to incorporate the casinos into more of a vacation destination that would attract families, young couples, and the elderly.”

The ability of brick and mortar facilities to react to the market landscape and diversify offering is represented in no better way than the regulated expansion of casino gaming into the online sphere, which has proved a boon for operators.

Gushin affirmed that any worry of online cannibalising casino spend is unfounded due to the cooperative nature of the operations between casinos and online developers.

“Atlantic City bottomed out a couple of years ago, and has shown for a lot of the casinos still there not spectacular, but steady growth. The state has shown its willingness, in terms of online, to be a partner, but obviously without compromising on the regulatory standards, but nevertheless working closely with the industry,” he said.

Whilst the success of online gaming in the state of New Jersey seems unlikely to abate, and may very well represent the clearest picture of market progression, the environment in which it is regulated points to a positive future for the city by the sea, built as ever upon casino dollars.

Atlantic City still has a way to go to truly establish itself as a true gaming resort destination but the progress made in recent time paints a picture vastly improved on twelve months ago, Gushin commented of the steps made, “These things are a vote of confidence in Atlantic City’s future, brick and mortar is not going away.”