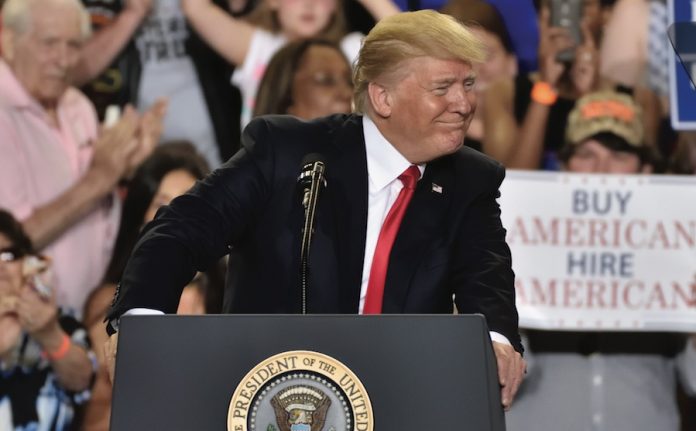 A Delaware-registered company representing US president Donald Trump has applied for a casino trademark in Macau, raising the possibility that the Trump Organization could look to acquire a casino licence when the current concessions come up for renewal in 2020.

A Trump Organization company has applied for four new trademarks in Macau, including one for casinos, stoking speculation about the company’s future business intentions in the special administrative region.

The news comes at a time when operators are waiting for the government’s final word on the casino concession renewal process.

The current casino licences are due to come up for renewal beginning in 2020, the same year the US president Donald Trump – who has currently taken a step back from his business interests – would be due to run for re-election.

Macau’s concessions come with a 20-year expiration date, which means that beginning in 2020, Stanley Ho Hung-sun’s SJM Holdings and MGM China will be up for renewal, followed by Galaxy Entertainment, Sands China, Wynn Macau and Melco Resorts Entertainment in 2022.

“Given that this trademark application comes a few years before the concession renewal between 2020 and 2022, one has to consider the possibility that he may look at applying for a new concession,” said Ben Lee, managing partner at IGamiX Management and Consulting.

“It is a possibility, albeit remote. His children constantly scout the globe looking for new businesses and to expand the Trump brand.”

The applications for the Trump brand – first reported by the South China Morning Post – were made in June by a Delaware-registered company called DTTM Operations LLC, which is responsible for handling the ownership of dozens of the president’s trademarks, covering gambling and casino services, as well as real estate, construction and restaurant and hotel services.

“The coming renewal might be seen as a window of opportunity for those who couldn’t get it last time,” said Glenn McCartney, associate professor in international integrated resort management at the University of Macau.

Two key Trump backers – Sheldon Adelson and Steve Wynn – both have Macau gaming licences and it is conceivable that either could offer him a deal in their future licensing plans.

However such a proposition would be highly complicated. Adelson’s Sands China gets its sublicence from Galaxy, while Steve Wynn used the Galaxy-Sands structure to charge Melco, owned by Stanley Ho’s son Lawrence, $900m for its subconcession.

“A Trump partnership is a possibility, but to register trademarks is a common business practice,” McCartney continued. “It does not mean that it will necessarily be materialised.”

McCartney also posited that the move might simply be a “defensive measure”, so no one else could use the logo or brand in Macau. The Macau government lists 22 other trademarks registered by DTTM Operations for various brands dating back to 2006, including Trump Tower, Trump International Hotel and Tower and the Donald J. Trump brand.

For its part the Trump Organization has stated that the trademark applications in Macau “simply represent a continuation of [its] efforts” to enforce and protect its intellectual property rights around the world. Industry commentators suggest it is too early to tell how supportive Beijing would be of a gaming project involving the current US president in Macau.

“China did approve all his trademarks very quickly,” Lee added, referring to the mainland’s approval of 38 Trump trademarks in March, which included businesses ranging from hotels to golf resorts.

Back in 2001, Trump was part of a consortium of billionaire investors that bid unsuccessfully for a casino licence in Macau.

“It would be a long shot” for Trump to win it, said Alex Bumazhny, a gambling analyst at Fitch Ratings. “If Macau does look west, there are a handful of publicly traded gaming companies with more recent track records of developing and operating largescale casino resorts.”