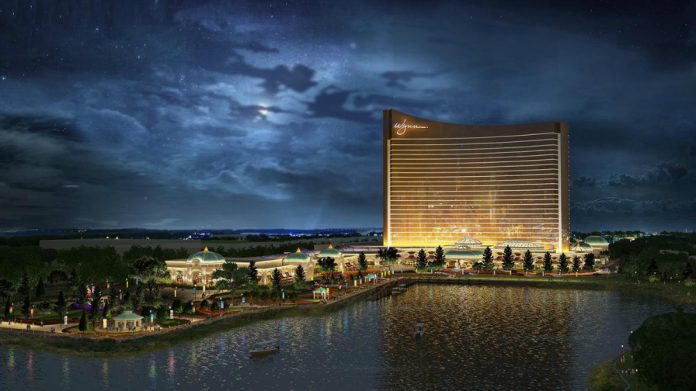 [dropcap]O[/dropcap]n October 26, just two months after Wynn Resorts cut the ribbon on its latest Macau leisure project, Wynn Palace, the group received news that Wynn Boston Harbor, the $2.1bn (E1.9bn) casino and hotel complex being built along the banks of the Mystic River in Everett, Massachusetts, had received final approval from the state gaming commission.

Located approximately four miles north of Downtown Boston, Wynn Boston Harbor is being promoted as a five-star global destination gaming resort that will feature more than 600 hotel rooms with sweeping views of the historic US city. will include a “lavishly designed” casino with multiple gaming areas, including a poker room and high limit slots.

Situated on the waterfront along the Mystic River and connected to Boston Harbor, the resort will open up the Everett shoreline to the public for the first time in more than a century.

Wynn is spending $30m (E27.5m) to clean up the heavily contaminated site and create a six-acre park along the water that will feature pedestrian and bicycle paths, an events lawn, picnic and public viewing areas, ornate floral displays and retail and dining experiences that overlook the Wynn river walk.

Guests and employees of Wynn Boston Harbor will be able to connect to points across the harbour via a Hong Kong to Macau-style water transportation system. Low-profile, European style boats will be used to sail back and forth without the need to raise area drawbridges.

Wynn Resorts beat out a rival proposal from Mohegan Sun and Suffolk Downs to win the coveted Greater Boston casino licence in 2014. Originally known as Wynn Everett before the resort company’s billionaire CEO, Steve Wynn, changed the name, the Massachusetts casino was scheduled to open in 2018, but a series of legal challenges, most notably from Somerville Mayor Joseph Curtatone on environmental concerns, delayed the project.

Curtatone appealed the state’s DEP approval of the casino, saying the resort’s impact on traffic and pollution would negatively affect his residents.To help offset additional infrastructure and law enforcement expenses expected to be incurred by the casino, Wynn is paying the City of Boston $2m (E1.8m) per year for the next 15 years.

“One does not need to be a casino enthusiast to recognise and acknowledge the benefit that accrues to a city when a long-dormant contaminated waste site is cleaned up and brought back to useful life,” said DEP hearing officer, Jane Rothchild, in her 50-page decision to reject the appeal. “Chapter 91 recognises this work as a public benefit.”

Wynn officials say as many as 4,000 construction workers will be hired for the project. About 4,000 permanent jobs will be created when the casino opens. Resorts prepares to cut the ribbon on MGM National Harbor on December 8.

Located just minutes from Washington D.C. on the banks of the Potomac River in Maryland, MGM Resorts International’s $1.4bn (E1.2bn) luxury destination will feature more than 125,000sq.ft of casino space, including poker, a variety of table games and more than 3,300 slot machines.